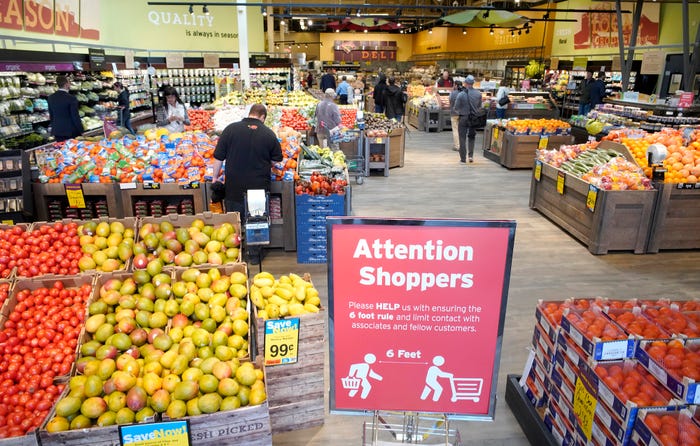 At least 4 grocery store employees across the US have died of the coronavirus. Their union is demanding sanitary working conditions, protective gear, and hazard pay for these essential workers.

While most Americans are under orders to work from home to slow the spread of the coronavirus, employees of the nation’s grocery stores are continuing to clock in — risking their lives for what is usually a low-paying job.

As of Tuesday, at least four grocery store workers across the country had died of COVID-19, from a 27-year-old greeter at a Giant store in Largo, Maryland, to two workers at the same Chicago-area Walmart. And Monday night, Trader Joe’s confirmed the death of a worker at a Scarsdale, New York, store.

Last week, Business Insider’s Courtney Biggs spoke to a handful of grocery workers who reported working long hours in unsafe conditions during the coronavirus crisis — from customers crowding their space to a lack of protective gear.

Rebecca, a grocery store worker in Manhattan, said her store had changed its policy to allow employees to wear face masks, but isn’t providing them — so she’s been having her mom ship her masks from out of state. She says she’s been working 30-to-40-hour weeks at what was supposed to be a “low-stress job.”

“We’ve had two cases at my store alone and I’ve worked alongside both of them in the last two weeks,” Rebecca said. “But because I can’t just get a test to make sure, I just keep working and waiting until symptoms show.”

At the same time, workers said they keep coming into work because they know their job is important during these times.

“I’m scared to go to work and worried about getting sick over a job that pays less than $12 per hour. But I also feel like I can’t just stay home because the elderly need supplies and a kind word. It’s really a hard decision,” said a 45-year-old grocery worker in South Carolina, who asked to remain anonymous.

With grocery stores one of the few businesses allowed to remain open in the US, petitions have been gaining traction online, calling on chains to better protect and pay their workers.

United Food and Commercial Workers International Union, which represents more than one million food service workers in the US, has also been fighting to insure that grocery store employees are outfitted with protective equipment and are paid appropriately during the outbreak.

They’ have been calling on members to report safety concerns, and put out guidance to shoppers on how to stock up safely.

UFCW has been working with the government, on the federal and state level, to classify grocery workers as “essential personnel,” which would entitle them to things like protective equipment, childcare subsidies, and quicker access to coronavirus testing.

Walmart and Kroger are implementing new measures to protect workers

And major chains have been responding. Walmart and Kroger Marketplace, the nation’s two largest grocery chains, have started pre-shift temperature checks, and are providing workers with gloves and masks.

Beginning Tuesday, Kroger is also limiting the amount of customers allowed in the store at one time, to 50% of the building’s capacity.

“Kroger’s introduction of customer capacity limits is one more way we are doing our part to flatten the curve while operating as an essential business, providing our customers with access to fresh, affordable food and products,” said Mary Ellen Adcock, Kroger’s senior vice president of operations.

“During this national pandemic, we are committed to adopting preventive measures to help protect the safety and health of our associates, customers and communities.”