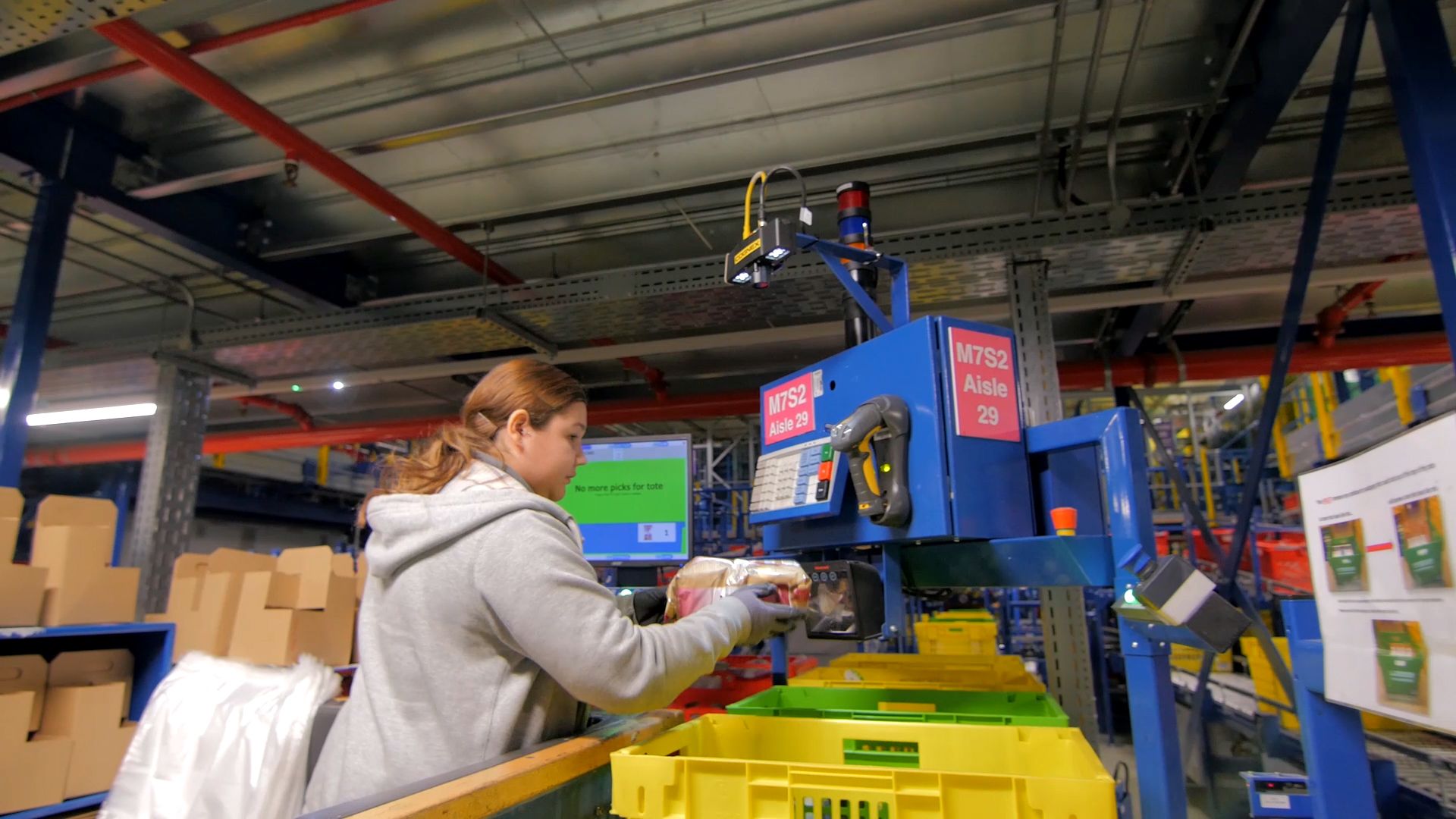 Beyond self-checkout: How grocery stores are incorporating tech

Grocery shopping is completely different than it was 50 years ago. Fresh groceries and meal kits can now be dropped off at your doorstep. Retailers are redesigning their warehouses for online shopping. Robots adorned with googly eyes alert staff of spills.

What’s next for the future of food shopping?

Meet Alphabot, a robot that could potentially change how we grocery shop in the future. This little robot can be found at Walmart Superstore in Salem, New Hampshire, in a giant steel structure that stretches from the floor to the ceiling. This robot cage takes up much of the 20,000-square-foot space.

Alphabot was created by John Lert and his company Alert Innovation. Lert walks us through how robots are taking on some of the work involved with filling online grocery orders. Specifically, for packaged products, like cereal and milk.

Alphabots aren’t little Wall-Es. Think of them as tiny pickup trucks, moving along within the giant metal cage meant only for robots. This store will soon be home to 50 Alphabots.

The system works kind of like a vending machine. Robots move plastic bins called totes that are stocked by humans. The totes are filled with one or a few items of the same kind, like a tote for peanut butter or frozen pizza. The robots move side to side and up and down to fetch the right bins. Then, they zoom to a loading station where a human worker bags your order. Without walking the aisles, workers can build 10 times as many orders per hour.

Beyond Walmart, the demand for robots shows retailers are thinking more about how to expand their online shopping options efficiently. But why? Online shopping only makes up less than 3% of all grocery orders.

“I mean, the only thing that motivates a retailer more than what their shoppers want is what their competitors are doing,” says Keith Anderson, a lead strategist at Profitero, an e-commerce analytics and consultancy company.

He says one of the biggest moves that shook the grocery industry was when Amazon bought Whole Foods for nearly $14 billion in 2017. But he predicts a future with even more radical changes.

“I don’t want people to think ‘Oh, what will be different in 30 years will be you’ll walk into an Amazon Go store and you won’t have to take your wallet out to walk out with a box of Frosted Flakes,’ ” says Anderson. “I think it will be wildly different in 30 years, and I’m not certain that you’ll go into any store in 30 years.”

Anderson thinks stores will have to focus on last-mile automation — or how your avocados get from the store to your door. It’s the most expensive part: Grocers need to pay for fuel, salaries, cooling systems and more. Emerging tech could make a difference.

Improvements in online grocery shopping could also help fix another problem: access to food. Last month, the USDA launched a pilot in New York that allows people to buy groceries online with food stamps for the first time ever.

While some tech upgrades are welcome, some experts have concerns about how retailers focusing on online shopping will use data they collect about customers.

“I’m sure the folks at Amazon are thinking of creative ways of using Amazon Prime to identify customers and to pull all the data that they know about them to make sure that they offer the products that I want when I want,” says Norbert Wilson, a professor at Tufts School of Nutrition. “I wonder if that automation will reach all people equally and successfully.”

Wilson fears low-income residents will not be as much of a priority for companies because those consumers tend to spend less money. He wonders if retailers will use shopping data to give better deals or incentives to shoppers who spend more.

“Even when you bring in a new grocery store into a low-income area, it doesn’t necessarily lead to this increase in the nutritional quality of the foods that people purchase,” Wilson says. “The key thing would be: How can we ensure that higher quality, higher nutritious foods are available and encouraged?”

Grocery stores are also going to have to adapt to changing consumer preferences. Inside a Stop & Shop in Watertown, Lauren Abda, the founder of Branchfood — the largest community group for food professionals in New England — reimagines what the produce section could look like.

“Perhaps they’ll start growing their own food in market,” Abda says. “You know, right now, some of that’s happening on the roofs of grocery stores, but I suspect that we’re going to start seeing this happening [inside] grocery stores. And so while the produce department area is certainly alive, I think it will start becoming even more so.”

Abda says grocery stores know people crave more engagement — with each other and with technology.

“The phone may be a helpful assist, right?” she explains. “Like maybe you’re walking down an aisle and you’re pinged with a deal because you’ve walked by this particular brand and maybe subscribe to that brand, and they know just based on your geo-location that you’re looking at their products in store.”

But family-owned, regional retailers think they have a lot to offer when it comes to adding a personal touch when educating shoppers about food. And they’re doing this for more than just the benefit of the customer. It’s to stay in business.

“Roche Bros. started as a neighborhood store in Roslindale,” says Arthur Ackles, the company’s vice president of merchandising. “I still like the one-on-one human contact.”

He says the company is opening a new store in Watertown next year that will be designed, in part, around how customers shop and eat.

Roche Bros. is embracing technology, too, putting iPads in stores to help shoppers understand nutrition labels. The grocer is also upgrading its pick up and delivery options.
But in its roadmap, Ackles said, Roche Bros. will value human connections above all. Robots need not apply — at least for now.

“Yeah they’re funny, they look cute and you know people might go, ‘Oh wow, look at the robot!’ ” Ackles says. “But ultimately, will it help you sell groceries and does it help the customer? Maybe, maybe not. We’ll see where it goes.”

What’s clear is that the winning equation for grocery stores in the future means giving all customers the ability to shop how they want, when they want.