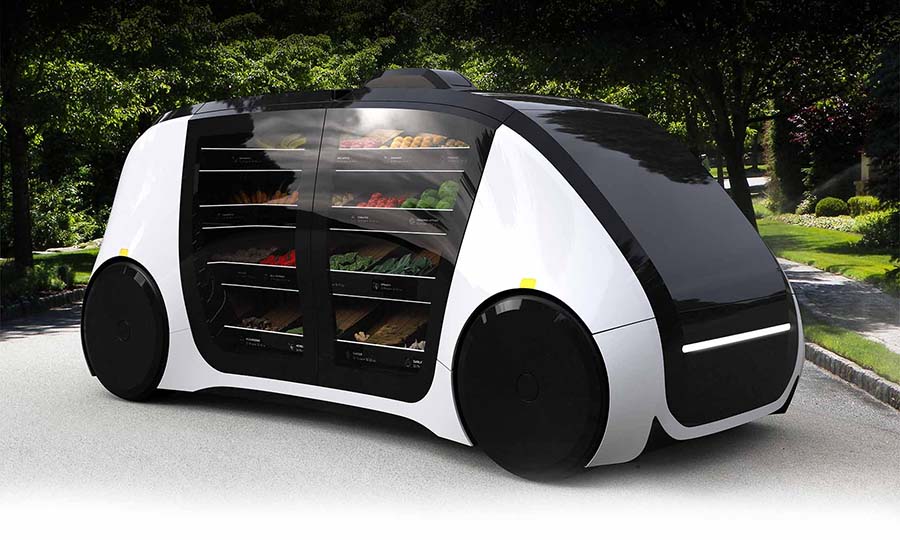 On the heels of Amazon Go (a brick-and-mortar which allows customers to grab what they want throughout the store, scan the products, and simply walk out with it) attracting a significant amount of consumer (and media) attention, another start-up is gaining momentum in the new and exciting world of semiautonomous grocery shopping. And it is doing it in an ingenious way: by driving the grocery aisles right to your home.

Based in Santa Clara, California, Robomart is taking autonomous driving in a different direction—quite literally. Users would tap a button on their smartphone to request a Robomart vehicle come to their home (or whatever address they have listed, much like an Uber or Lyft vehicle is hailed). The self-driving car would then deliver a cornucopia of groceries on demand. Anything from produce and baked goods to prepared foods would arrive at the customer’s front door in minutes (depending on the traffic and distance).

The founder of the start-up company is Ali Ahmed, an innovator who first launched a smartphone-based service called Dispatch. The business model for Dispatch was such that consumers could order groceries via text message. What Ahmed realized, however, is that consumers were less inclined to purchase fruits or vegetables or meats that they could not physically inspect before purchasing them. That’s when he first conceived of the idea for Robomart. “The [customers] just don’t trust somebody else picking them,” Ahmed said in an interview with PYMNTS, a website covering news on commerce and innovation. “People need to pick their own fruits and vegetables.”

If Robomart is the wave of the future, as it was touted to be at this year’s 2018 Consumer Electronics Show in Las Vegas, then grocery stores both big and small should start paying attention to the start-up’s business model, if they haven’t already. The way Robomart works is that allows stores to rent out an autonomous vehicle in installments of two years at a time. Once a Robomart vehicle is summoned and dispatched and arrives on-site, customers can unlock the door and select whatever produce they desire (which have been housed in an air-conditioned unit during the commute). A bill is made after the purchase is completed, sending the vehicle on its way back to the store. Robomart’s vehicles are touted as being all-electric, with an estimated 80-mile range and a top speed of 25 m.p.h. These statistics will be put on display in the near future, as the start-up is working with retailers to sponsor a pilot runs with customers in the San Francisco area.