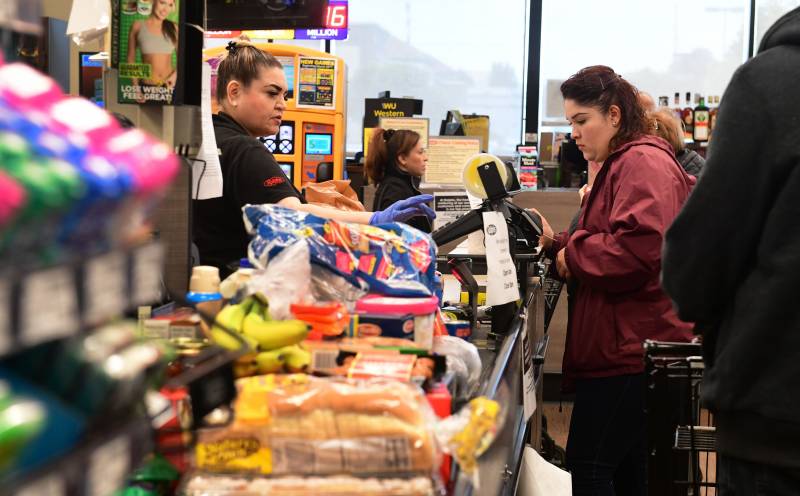 Grocery shopping is the new black.

With the U.S. economy in a free fall from aggressive coronavirus containment policies, retail sales collapsed at a record pace in March. Underneath a headline that plunged by a worse-than-anticipated 8.7%, most major categories logged double-digit declines.

That is, with the exception of grocery stores, which have been deemed essential operations by state and local officials. Food store sales there skyrocketed by nearly 28% month-over-month, followed by a surge of 26% in February. Meanwhile, the broader food services category — which includes bars and restaurants — fell off the proverbial cliff at a nearly equivalent pace.

March’s retail figures put a spotlight on a broad shift that’s been underway since widespread stay-at-home orders have resulted in the shuttering of businesses and restaurants. The consumption-reliant U.S. economy, where consumer spending accounts for over 2/3 of economic activity, is seeing mass panic buying as consumers to shift to eating at home — generating dramatic changes in how people work, eat and live.

In a study published in mid-March, analytics firm Placer.Ai said all grocery chains recorded an “enormous year-over-year jump” as the month got underway. While the firm noted some stores performed better than others, it noted Kroger and Albertsons “leading the way with 36% and 40% year-over-year growth.”

As a result, long lines are queuing up outside of food stores all over the country, even with some restaurants offering takeout and delivery options. OpenTable, which tracks data on seated restaurant diners, reported a stunning 84% plunge nationwide amid a “giant spike in grocery delivery websites, suggesting consumers are replacing restaurant meals with groceries rather than deliveries.”

According to Yelp, community-based food and grocery stores are getting a serious boost from the new reality — skyrocketing by triple-digit percentages. It comes as more popular chains struggle to keep up with soaring demand and consumers endure long wait times for delivery and in-store shopping.

And big box retailers like Amazon, Walmart, Target, and Costco “will come out of this crisis unscathed, not only because they sell essential goods, but because their sheer size and investment in online order and delivery allows them to out-survive smaller competitors,” said Kerstin Braun, president of Stenn Group, an international provider of trade finance.

“With widespread lockdowns only beginning around the middle of March, and the panic buying phase of the crisis over, retail spending looks like it will fall by at least as much again in April,” said Capital Economics, which expects second quarter growth to swoon by a whopping 40% annualized rate.