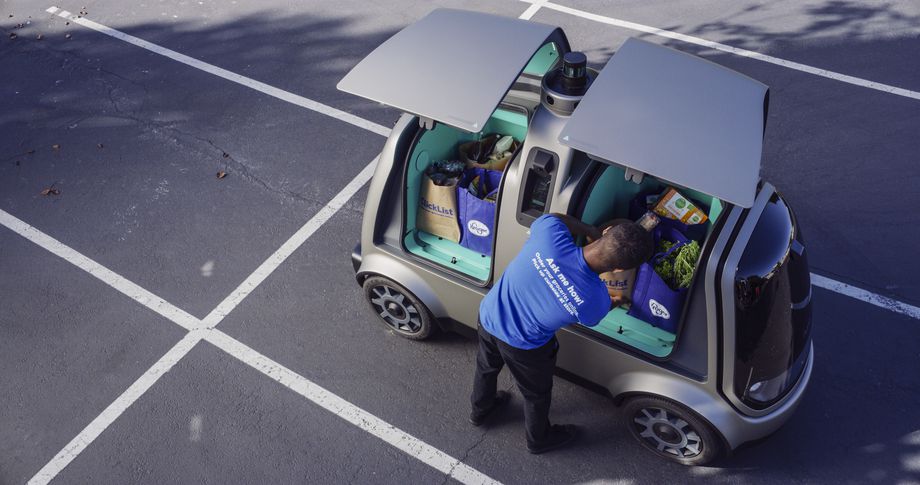 Robotic delivery companies are targeting grocery and new tech solutions as questions remain about the performance and use value of the autonomous devices.

Among the earliest players in the self-driving delivery space are sidewalk robots, pedestrian-scale autonomous machines that can be seen toddling across university campuses and on the sidewalks in a growing number of residential neighborhoods.

Like robotaxis and Class 8 trucks, the pandemic has accelerated development and commercialization of these devices, as retailers, grocery stores in particular, seek all the help they can get to deliver e-commerce purchases to consumers.

Despite the interest, robotic delivery still carries with it plenty of unknowns. Among the questions: how these devices, en masse, will interact with humans who use the sidewalk and other pedestrian spaces, what applications make the most sense and how the business models will develop.

“There is a lot of interest on the market for this kind of solution,” said Pedro Pacheco, a Gartner analyst who works on smart mobility and connected vehicles. “But interest doesn’t mean companies want to adopt right away.”

The past six months have seen a slew of Covid-fueled  partnerships between grocery stores and autonomous, last-mile delivery companies using cars, vans and trucks.

Now those partnerships are coming to the sidewalk robot segment. One of the first collaborations is between Save Mart, with grocery stores in California and Nevada, and Starship Robotics, arguably the biggest name in autonomous delivery devices

Until recently, Starship had been deployed primarily on university campuses, ferrying cafeteria and restaurant food to hungry students and faculty. Resembling coolers on wheels, Starship robots can carry up to 20 pounds, deliver within a three to four mile radius and travel at walking speed.

In May Starship started to field inquiries from grocers seeking to meet demand for contactless delivery during the pandemic and this fall inked the grocery deal with Save Mart, to deliver staples and snacks to customers of the flagship Modesto, California store.

Robert Cady, Save Mart’s senior director of marketing strategy and analytics, said in an email that the supermarket chain is always looking for innovative solutions, and that it selected Starship because the robots had traveled tens of thousands of miles, and completed over 500,000 deliveries globally.

So far shoppers are using the devices to deliver grocery staples and snack items. Customer feedback, according to Cady, has been “incredibly positive,” and Save Mart plans to expand the delivery area accordingly.

Earlier this month, Self Point, a digital commerce solution for grocers, signed on with Tortoise, a a robotic delivery startup that differentiates itself from the competition with a focus on remote operations as a transition to full autonomy.

Controlled by remote operators based in Mexico City, the Tortoise carts are equipped with modular containers and can carry over 100 pounds, according to Shevelenko. He said the device fills a niche between the smaller Starship robots and larger autonomous vehicles such as the golf cart size device built by self-driving vehicle company Nuro.

Tortoise can deliver to homes within three miles of the store at a maximum speed of seven miles per hour.

Shevelenko, whose previous experience includes a stint as director of business development for Uber, said he and his partner developed the cart last summer after working on another project, an autonomous lawnmower.

“We came to a startling realization,” he said. “If you can make possible remote control over a 4G network and have partial autonomy with a light electric vehicle weighing under 200 pounds, moving at six or seven miles per hour — it only takes $100 in added electronics with commodity components in every smartphone to make that possible.”

Tortoise, he said, was founded with the idea that “there would be a lot of different vertical applications for what we call ‘low-speed remote repositioning.’”

Through its partnership with Tortoise, Self Point will now offer contactless delivery as an option for local grocers to deliver items to their customers.

On the sidewalk and in the bike lane

New startups and grocery partnerships come as other forms of autonomous robotic delivery are picking up new markets — and venture capital. Notably: Earlier this month Nuro closed a $500 million Series C, and its autonomous deliveries of groceries and pharmaceutical items are now available in Houston, Texas.

Another startup, Refraction AI, is also targeting the space between Starship’s and Nuro’s models with its three wheeled REV-1 robot that can navigate sidewalks, bike lanes and car lanes.

Like Starship, Refraction got its start in 2019 doing takeout but moved into grocery delivery during the pandemic. It has seen a surge in orders with REV-1 since the start of the pandemic, the company said.

Earlier this fall Refraction named Luke Schneider, a former executive with Zipcar, Flexcar and Silvercar, as its new chief executive officer, with a goal of expanding and scaling the technology, he told FreightWaves.

Generally speaking, robotic delivery has not attracted the same level of scrutiny from safety advocates as autonomous cars and trucks.

But how well the technology actually works and how it will interact with other human users of sidewalks (and bike lanes) remains an open question. Starship, for one, gained unwanted attention last year when one of its robots stalled out in a curb cut, impeding travel for a student in a wheelchair.

That armies of robots could eventually compete with pedestrians, including senior citizens and playing children, is another concern.

In an interview with Frightwaves last year, Joseph Sullivan, maker of a delivery robot called DAX, said he was concerned his competitors were pushing to get delivery robots on the market before the technology had been perfected. That situation, he worried, would lead to a perception among consumers where “the basic idea is fantastic, but everyone kind of hates it.”

Echoing some of those concerns, Brittain Ladd, a former Amazon executive who now runs his own consultancy, said Starship and Amazon Scout, the e-retailing giant’s contribution to the sidewalk robotics segment, still have performance issues and insufficient capacity, at least for grocery delivery.

“Neither vehicle can carry heavy loads, limiting the total number of deliveries each vehicle can make,” Ladd said in an email to FreightWaves.

For that reason, Ladd gave his stamp of approval to Tortoise which can carry up to 100 pounds. He noted also that its remote operators have a 360 degree view around the cart, and that the operator drives the cart to each delivery and then drives the vehicle back to where it is housed.

“This allows for much better performance, and it avoids the [breakdowns] encountered by autonomous vehicles like Scout and Starship,” he said.

Amazon declined to comment on Scout, but a spokesperson directed FreightWaves to company blog posts about the electric autonomous vehicles, which resemble a cooler and move at walking speed.

Notably, in September the e-giant created new Amazon Scout research and development teams in Cambridge, England, and Germany. The groups will be working on software that helps Scout devices “safely and autonomously navigate around pedestrians, pets, and obstacles found in residential neighborhoods such as recycling bins and sign posts.”

For now, human ambassadors accompany the Scout robots as they make deliveries in pilot programs underway in Snohomish County, Washington, Atlanta, and Irvine, California. Customers in participating locations place their orders, which are delivered via conventional transport or Amazon Scout, depending on the item ordered.

As technologists continue to work on developing reliable, safe and useful delivery robots, cities simultaneously are ramping up investment in bike and pedestrian infrastructure, converting spaces for cars into places for people to walk and bike during the pandemic.

“We’re living through a big shift in how road space is allocated, from higher to lower speed modes,” Shevelenko observed.

That shift could benefit delivery robots, which need good pedestrian infrastructure to get around.

Whether startups in this segment and cities will find common cause in improving sidewalk infrastructure, much of which is in disrepair, is an intriguing proposition whose outcome remains to be seen. For now, what is clear is the surge of interest in the devices among retailers, and the ongoing need for technological fixes.

“What I see from the market is there are obstacles, the solutions are not perfect, and they are not adapted to all sorts of use cases,” Pacheco said.

But with the pandemic accelerating interest in robotic delivery, the issue now, he said, is choosing the right cases where the technology is practical and tangible business benefit like cost, speed.

“Now is also the time to solve the embryonic technology problems these devices have,” Pacheco said.