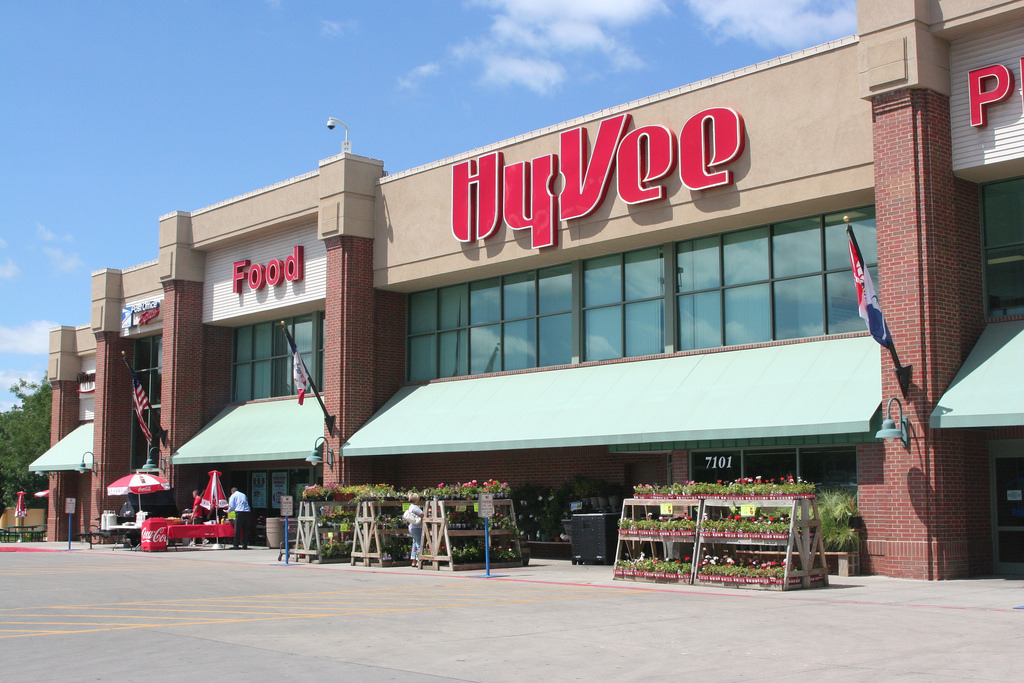 Imagine going to the grocery store for dinner, not to pick up a rotisserie chicken to take home, but to actually eat at the store. As online grocery shopping grows, many supermarkets are adding sit-down restaurants in a move to attract more millennials. And it seems to be working.

Kyle Riggs, who manages Market Grille, the restaurant at a Hy-Vee grocery store in Columbia, Mo., says most people don’t expect to find this level of food service next to the produce aisle.

“And then when they walk in here, they’re just amazed at the full wine wall with the ladder that slides,” he says. “We have 20 beers on tap and a lot of high-end alcohol, whiskeys and things like that, and great food.”

The ingredients come from the store. They are cooked in the store’s kitchen and served here. Riggs says football games can pack the 148-seat restaurant with college students and young professionals.

Indeed, Rob Hunt, 30, and Aaron Hadlow, 28, have been stopping by all summer for happy hour after work. Hunt says the variety of food, the local, craft beer on tap and ultimately the price are a big draw.

“You can’t get $2 pints of beer anywhere else and that’s honestly the biggest thing,” he says. “We tried a couple of other places this summer and they were fun, but it’s just cheaper over here.”

Across the country, supermarkets like Whole Foods have been offering sit-down dining and drink deals for years. The trend of adding full restaurants, sometimes called “groceraunts,” falls in line with the uptick in prepared store meals, which has grown 30 percent since 2008 and driven $10 billion in sales last year, according to the NPD group.

Hy-Vee, which was one of the early adopters of the groceraunt model, has added 115 Market Grilles to date.

While grocery stores had been losing customers in recent years to smaller markets and online food shopping, groceraunts have helped bring back foot traffic to the old-school grocers.

“It’s really made a big difference for us in the evening,” says Jeremy Gosch, executive vice president strategy and chief merchandising officer, at Hy-Vee, Inc. “That’s where most traditional grocery store food service had oppurtunity.”

Gosch says creating an in-house restaurant, different ambiance and different lighting were important to draw in diners. “I think we’re capturing business that we didn’t have before in our food service department,” he says.

While people are looking for more options in prepared foods, the traditional center of the store, with cans of beans and boxes of cereal, has had to make room. That means space on the shelf is becoming more competitive.

“As … we continue to roll out into existing stores some food service updates and expansion, especially on meals to go for consumption at home, I think you’ll see a little bit of that compression,” Gosch says. That could mean a future with only one size and brand of canned tomatoes on the shelf.

A large part of this shift is thanks to millennials, like Hunt and Hadlow, who are more likely to dine out than older generations. More than half of millennials surveyed by financial services firm Morgan Stanley said they had eaten out in the past week, compared to 43 percent of previous generations.

Today, groceraunts are featuring seasonal menus and hiring graduates of the Culinary Institute of America as chefs. Food industry analyst Phil Lempert says this appeals to millennials, too.

“What these groceraunts can do is give them a convenient location where they can meet their friends, where they can have great food, and have it at a great value,” he says. “That becomes a terrific formula to attract this generation.”

Millennials are also turning away from slumping restaurant chains, like Chili’s or Applebee’s, which plans to close up to 60 locations this year.

That’s forcing some restaurant chains to look toward grocery stores as potential partners. Think of Starbucks and Caribou coffee kiosks in grocery stores, except in this case, Wolfgang Puck wants his cafe to become the in-house restaurant, says Lempert.

“Now these restaurateurs want their space in the supermarket as well, because they know that it’s more convenient for people, it’s more of a one-stop-shop, and it’s hurting their traditional restaurants,” he says.

The next step for grocery stores may be to add home meal-delivery options, Lempert says, as digital orders ramp up with tech-savvy, young adults. Market analysts are looking at the Amazon-Whole Foods merger and expect both more restaurants to be added to grocery stores, and more people to order their groceries and dinner together online.

“This is a trend that’s going to continue to grow,” Lemeprt says. “Grocers are putting more money and more effort in this. They see it as their culinary mark, if you would, on society. So this is here to stay.”