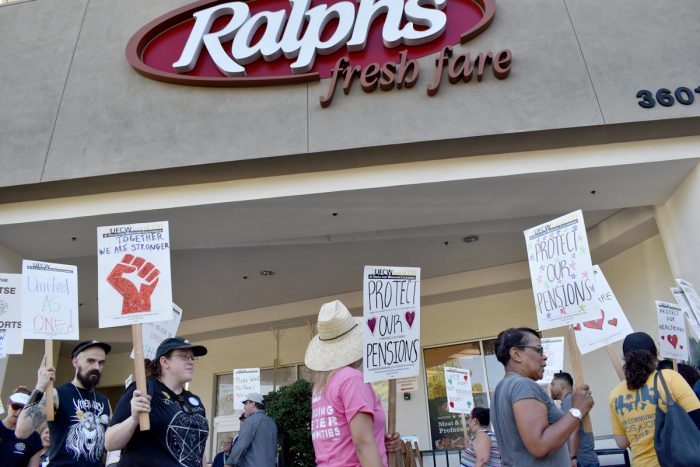 Details of the contract were not disclosed Sunday pending meetings with some 46,000 members, which will be held Monday at the United Food and Commercial Workers’ seven locals, according to a union statement.

Union leaders will recommend its workers ratify the agreement with Ralphs, Vons, Albertsons and Pavilions, according to an email statement from Mike Shimpock, spokesman for Local 770.

Greg Conger,  president of Orange County’s Local 324, said in a phone interview that the agreement was reached at 4 a.m. Sunday.

“There’s something for everyone in our membership,” he said. The deal did include some compromises.

“One side doesn’t come out of these meetings jumping for joy,” he said. “But I don’t think there’s anything someone will dislike.”

“We are pleased to have worked with the union to secure increased wages, continued premium health care coverage and pension stability,” Votava said. “Our associates are the heart of our company and this agreement is a reflection of their contributions.”

Representatives for Albertsons, Vons and Pavilions did not respond Sunday to requests for comment.

“This is a step forward toward what our vision of what grocery jobs should be in the future,” said John Grant, president of Local 770, in the statement.

Results of the membership vote will be announced Thursday morning.

Supermarket executives and UFCW leaders this weekend ended five days of intense talks, most likely avoiding a repeat of the 2003-2004 labor dispute that brought vast changes to the area’s grocery industry.

Southland grocery workers of union local 770 march in front of at Ralphs store in Woodland Hills Thursday. They are United Food and Commercial Workers as they continue a series of rallies to call on their employers to accept their request for “higher wages that keep up with inflation of their healthcare and retirement plans” in a new three-year contract. UFCW members’ former contract expired in early March, and members voted 96% to authorize a strike in response to their employers’ reluctance to accept workers’ requests, contact says. Woodland hills CA, Thursday. Aug 15,2019. (photo by Gene Blevins/Contributing Photographer)

The union had set this weekend as the final stage of contract negotiations. The two sides have been in negotiations since early March when the previous contract expired. Employees continued to work under the terms of the expired deal.

A federal mediator joined the negotiations in April to help facilitate a deal. But the progress has been minimal, and in late August union leaders set the five-day session that ended Sunday as the deadline before bringing the question of a strike directly to the members.

A strike would have been very costly to both two sides. The 2003-2004 strike and lockout cost the three major chains a combined $1.5 billion in sales, according to estimates and cost 60,000 workers almost five months of lost wages.

It also cost union jobs overall because most of the major grocery chains have shrunk in the last 15 years. The strike gave rise to the influence of nonunion chains, including Walmart, Costco and Target, who invested heavily in grocery sales. Walmart and Target did not have full lines of groceries before 2003.

There are 200 fewer groceries staffed by union workers in Southern California than there were during the 2003-2004 strike, according to Burt Flickinger III, a retail analyst with Strategic Resource Group.

Fifteen years ago, unionized groceries commanded slightly more than 60% of the market. Today it’s closer to 40%, with Costco and Walmart taking the largest pieces of that market share.

Flickinger said Friday that both the big-box chains, along with Target,  are making strides in their reach for grocery shoppers. Costco said it is now the top provider for prime beef and has a growing demand for organic produce.

“And Walmart said that between now and 12 months from now, it will be able to deliver fresh food to every Southern California home,” Flickinger said. “Target said it is also accelerating its home deliveries.”

Before the 2003 strike, Flickinger pointed out, there was just one Walmart in eastern San Diego County and Imperial County. Today there are 26. Several chains that did not exist in Southern California15 years ago, such as Aldi and Sprouts, are now gaining market share.

The rise of online shopping for daily grocery supplies is an issue the major unionized chains are still trying to catch up with. One shopper outside a Riverside Ralphs store last week said she was running into the store for a single item. She said she does almost all her shopping by using Instacart.

Flickinger said he expected both parties to understand the long-term stakes involved.

“I think both sides will reach a constructive, competitive contract,” he said. “It’s important for unionized retailers to continue to reinvest, renovate, remodel, to continue to keep as strong as the non-union stores.”

Recently, a strike by workers at the Stop & Shop chain in New England — which lasted only 11 days but included the Easter and Passover holidays — cost the company $345 million, its parent company, Netherlands-based Ahold Delhaize reported.

A strike in Southern California would directly affect about 46,000 workers employed by Ralphs, Albertsons, Vons and Pavilions. Employees at the Stater Bros. and Gelsons chains, which was also represented by UFCW, have typically accepted the same labor agreements the major regional chains signed.

Over the last three months, UFCW has held numerous rallies outside stores, where they picketed and urged shoppers to boycott the stores while they were protesting. The locals in Los Angeles and Orange counties said they appeared at every Ralphs in that jurisdiction.

Many shoppers said they would honor picket lines if there was a strike and take their business elsewhere.

Calvin Smith, loading groceries into his vehicle in the parking lot of the Ralphs store on Magnolia Avenue in Riverside, said one of his first jobs was as a bagger at a Lucky’s store, and that left him sympathetic to the union’s cause. He said he would not cross a picket line.

“When it comes to a worker providing for a family, you have to get your voice heard,” Smith said. “And they need to get their requests granted.”

Eva Burgess, at an Albertsons in Riverside’s Orangecrest area, echoed that sentiment. “If there was a picket line, I probably would not cross it,” she said. ” They need to make a living wage.”

Another woman at the Albertsons parking lot, who declined to give her name, said she prefers Stater Bros. for groceries and was there to shop at a Petco location next to Albertsons. She said she is not a fan of unions, saying that they sometimes value union loyalty over efficiency and customer service.

“In some cases, (unions) have good intentions, but it seems that it makes bad people harder to get rid of,” she said.