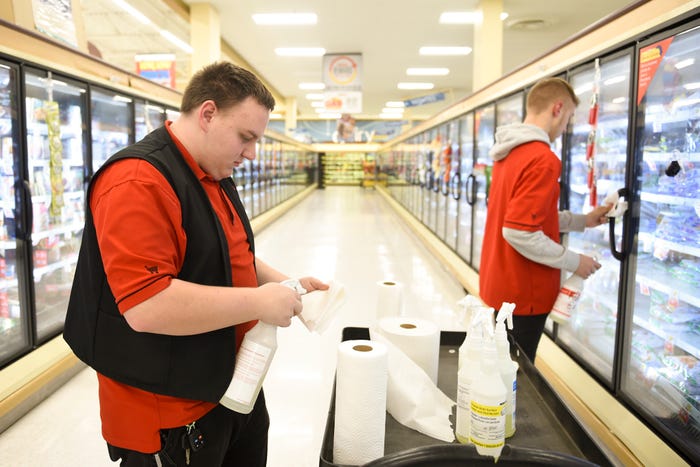 Grocery workers say morale is at an all-time low: ‘They don’t even treat us like humans anymore’

By adminAugust 12, 2020August 19th, 2020No Comments
“For the record, we are seeing reduced turnover among our store team members,” he said. The turnover rate for U.S. retail workers has generally risen during the pandemic, Commerce Department data show.

Adding to the stress, many workers say, are new responsibilities, including disinfecting store fixtures and enforcing social distancing and mask requirements.

Almost every major retailer, including Walmart, Home Depot and Target, is now asking shoppers to wear masks, although employees say enforcement is spotty and often fraught. Grocery workers have been demeaned, screamed at and even assaulted for reminding shoppers of the new protocols, with some of the most egregious incidents captured on video and shared online. Illinois this week made it a felony to assault workers who are enforcing mask requirements.

“The pressure is wearing away at us in great chunks,” said a mid-level manager at a Kroger store in Kentucky, who spoke on the condition of anonymity because he feared losing his job. “We’re getting it from both ends: customers and corporate.”

Company representatives, he said, are exerting more pressure to ensure shelves and displays are full, even though stores are at the mercy of broader slowdowns in the supply chain. “It’s little things like, why isn’t the yogurt display perfect?” the manager said. “They tear management to shreds and leave everybody on eggshells.”

Kristal Howard, a spokeswoman for Kroger, said the company has provided paid emergency leave and financial support for child care during the pandemic. It also gave employees an extra $2 an hour — which it called a “hero bonus” — for two months ending in late May and gave them a one-time bonus that topped out at $400.

“Our most urgent priority throughout this pandemic has been to provide a safe environment for our associates and customers while meeting our societal obligation to provide open stores,” Howard said.

In Jacksonville, Fla., the Publix store where Tonyalee Henderson works is trying to restore normalcy: It has reopened its salad and olive bars and stopped enforcing occupancy limits. But the reality for workers is far from normal, Henderson says. She is working fewer hours than she used to — about 20 a week instead of more than 40 — but is taking on extra responsibilities and often contending with irate customers for her $13.50 an hour.

“At first it was like, ‘You are so great for risking your life,’ ” she said. “Now the atmosphere is completely different.”

The company, she said, raised her pay by 50 cents an hour and gave her four Publix gift cards totaling about $200 after taxes.

In early April, managers gave each worker a disposable mask and a handout instructing them to clean it between uses by holding it over a pot of steaming water. Henderson began buying her own masks so she could change them after every shift. The company now provides Publix-branded cloth masks for its employees.

“So many of us are on the verge of quitting,” she said. “We’re having to do the work of three people while risking our health.”

A spokeswoman for Publix did not respond to requests for comment.

In Manhattan, a Trader Joe’s employee in her late 50s who asked not to be identified says she has wondered whether to quit. She has not been feeling well but used up her paid sick time early in the pandemic and has twice tested positive for covid-19 antibodies.

“The unknowns are the worst part of it,” she said. “I do notice I’m out of breath more often but I don’t know what that is. It’s this constant fear for your physical health — not just from coronavirus but also from people who don’t want to follow the rules.”

Kenya Friend-Daniel, a spokeswoman for Trader Joe’s, said the company asks employees to stay home if they are unwell and has provided as much as two weeks of paid time off to those who feel sick or are awaiting covid-19 test results. It also is offering an extra $2 an hour in “thank you” pay through the end of the year.

“Anyone who is concerned about working may take an unpaid leave without question,” she said, adding that employees who received health benefits from the company before the pandemic will continue to receive insurance through the end of the year, regardless of how many hours they work.

The worker says she loves her job and does not want to quit. She has worked in retail for more than 35 years, but says she is tired of being treated like a second-class citizen.

“It’s my career even though it may not be a well-respected one,” she said. “I’m not feeling great today, so I’m sitting here debating: Do I go in? Do I not? If I take time off for feeling sick, I’m treated like I’m guilty until I prove otherwise. It’s a terrible position to be in.”