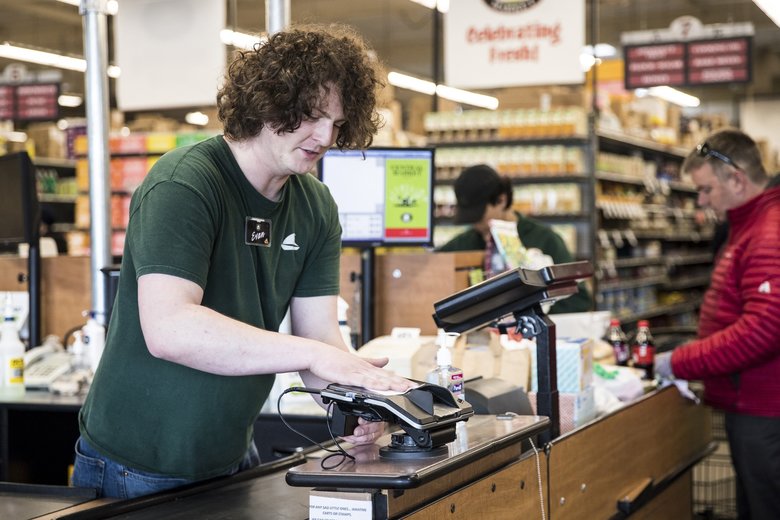 He Works In A Grocery Store, But He’s Still Losing Hours

Overnight stockers at supermarkets were among the first Americans to see how the novel coronavirus might change people’s habits.

Charles Rodriguez, a 26-year-old employee of a supermarket chain in the Greater San Antonio area, had an early indication. Just over a month ago, he walked out of the store to help unload the delivery truck that brought in the next day’s shipment. The sight stopped him dead in his tracks. “It looked like a holiday truck,” he said, filled to the brim. But it was March 12 — not Thanksgiving or Christmas.

The store was preparing for the high volume of shoppers that would flood its aisles as the virus began to shut down many aspects of American life. Still, Rodriguez and his co-workers had no clue how quickly their workload would ramp up to meet the increased demand.

He went from working 32 hours a week to eclipsing 40 hours, even earning some overtime pay. “We’d normally unload two pallets of low-velocity items [like canned foods and peanut butter]. But then we started getting 17 pallets,” Rodriguez said. “What was usually an eight-hour shift started becoming nine or 10 hours because of all the extra stuff.”

That phenomenally busy streak for Rodriguez, who makes just over $15 an hour, went on for two weeks. But then it ended with a thud.

The supermarket chain started shifting other workers into overnight stocking, both to cut down on paying overtime and to make better use of employees in less essential departments. For instance, it’s neither necessary nor safe for store employees to hand out food samples right now, so instead of laying those people off, the store has them refilling the shelves after closing. Since then, Rodriguez and many others in his department have actually lost hours.

Rodriguez said he appreciates his employer finding a way to avoid letting employees go, even if it means that he gets fewer hours and less pay. But it’s been tough for his department. “Now my shifts are closer to six hours per day, and I’m losing about eight hours per week,” he said. “My co-workers are hurting, and some of the original overnight stockers are kind of upset to have the extra help, because they want to hit their hours.”

Now that he’s only working around 24 hours per week, Rodriguez said he’s been far more conscious about his spending. His lawn mower stopped working — “The grass in our yard is really starting to grow,” he said — but he’s holding off on buying another one as long as he can. Similarly, his 2005 Kia Optima is on its last legs and has required a few trips to the mechanic. Rodriguez and his wife, Hilary, had been saving for a more environmentally friendly vehicle, but they have decided to put off that purchase for the time being.

Rodriguez is fully aware of the risks involved in continuing to work as the virus spreads, and his mother is worried about him. But he’s more concerned about what would happen if he lost his job: He would lose his health care coverage, which helps him pay for the medication that treats his hypothyroidism.

But Rodriguez and his wife are grateful that their situation isn’t worse. They are living at the house of his father — who is in the military and is stationed elsewhere — so they aren’t facing the pressure of paying a mortgage or monthly rent. And as Charles’s income has decreased during the pandemic, Hilary’s has increased because of it.

Hilary works for a grocery-delivery service, and with people increasingly reluctant to leave their homes, she is fielding almost more orders than she can handle. “Before, she was happily working 28 hours a week. Now she’s at 40,” and making about $17 an hour, Charles said. “We basically switched places: She’s making what I got on my old paycheck, and I’m now making what she did before.”

If there’s an upside to working inside a grocery store these days, it’s that the couple have been able to shop for themselves before or after their shifts, rather than making separate trips to pick over whatever might be left at busier shopping times. Workers can shop before the store opens each morning by showing their employee badges. (There are still strict item limitations, though, to prevent hoarding.)

Rodriguez and his wife have a storage bin of essentials in their home, just in case of emergency situations like this. “We still haven’t touched it yet,” he said.

Similarly, he hopes that his already-diminished hours at work won’t drop any further. Grocery stores are among the most bustling businesses in the country at the moment, but even the workers who saw that boom coming are worried about the future.