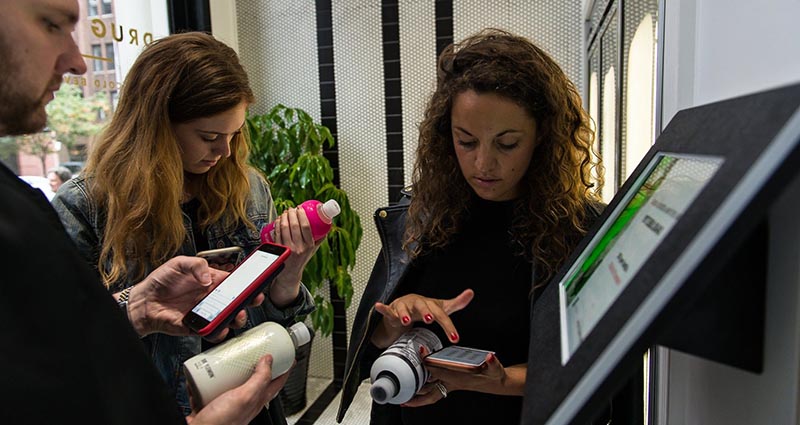 How Tech-Minded Consumers Are Driving Supermarkets To Adapt

The issue at the heart of the strike by 30,000 Stop & Shop workers goes beyond wages and benefits. Technology and competition are affecting more than the chain’s 240 stores in New England. However the labor dispute shakes out, one thing is for certain: Wherever you shop, the local supermarket is in the midst of a transformation.

Right now, 30 percent of Americans buy their groceries online, but according to a January 2018 Nielsen market study with Food Marketing Institute, that number will jump to 70 percent within 10 years. Rachel Greenberger, director of Food Sol at Babson College, said convenience is one of the strongest forces behind this shift.

“I don’t think the grocery store that you and I grew up with is going to continue to exist,” Greenberger said.

Data-mining giant Amazon has nailed convenience and, since its purchase of Whole Foods in 2017, Greenberger said other supermarkets have been scrambling to innovate.

“Many grocery stores are following the Amazon example and are blending the square footage of a traditional grocery store now to complement online shopping and in-person shopping,” she said.

That’s what’s happening in supermarkets like Roche Brothers. The company’s director of marketing, Dena Kowaloff, said in order to stay competitive, stores need to offer customers a number of ways to shop, including home delivery and curbside pickup, all offered over an app.

“You know, everybody’s got to have an app now, right? You can add things to your list or your basket. And then you can check out to home delivery. You can check out to curbside pickup. Or you can bring your list into the store,” Kowaloff said. “So, you know, we give you the convenience of figuring out what you want and figuring out how you want it. It’s really about offering the customer choice.”

That choice comes at a time of unprecedented competition. Food and groceries are available everywhere, from Amazon to Target to the local CVS and even the Dollar Tree. Not to mention food delivery services like GrubHub and PostMates.

“If you’re a supermarket, you have to be tuned in to everything that’s happening in this competitive landscape. And if the shift to food everywhere and online ordering doesn’t have you a little bit nervous, then you’re not paying attention,” Kowaloff said.

Shoppers want fresh food, convenience and for retailers to anticipate their wants and needs. We may buy our dry goods and paper towels online but still prefer to hand-pick avocados — something consumers soon may be able to do without ever going to the store.

Stop & Shop announced earlier this year that it will be rolling out a driverless grocery store this spring called Robomart. Think automated ice cream truck but filled with produce. The company has already deployed 6-foot tall robots called “Marty” purportedly to check for spills in traditional stores.

“We’re talking about taking middle-class jobs away and replacing them with electronics and machines, and you can already see in these stores that they’ve got more and more self-serve cash registers, less and less manpower at those registers. That’s a big issue in saving jobs,” Bollen said.

This technological shift may be a harbinger of the artificial intelligence takeover, but over at Roche Brothers, management is looking for humans to fill jobs. Kowaloff laments that the company no longer has a pipeline that began with teenagers working part-time.

“Kids would work for us in high school. They’d been baggers and clerks and maybe then they’d start to apprentice, cutting meat or learn to bake. And they’d move up with us through the ranks. Now it’s filled with people who are in their 40s who’ve been with the company for 15, 20, 25 years because they started when they were 14 or 15 and building that experience. You can’t find that anymore,” Kowaloff said.

“We’ve had, you know, 20-25 positions open for months. And we can’t get enough people. And so, you know, rather than a fear of robots replacing people, we may have to turn to some of those technologies to fill the gap in the people that we can’t get,” she said.

Although robots won’t be forcing out everyone who works at the checkout just yet, the question that lingers in stores and on picket lines is whether the demand for people will outpace what technology offers.