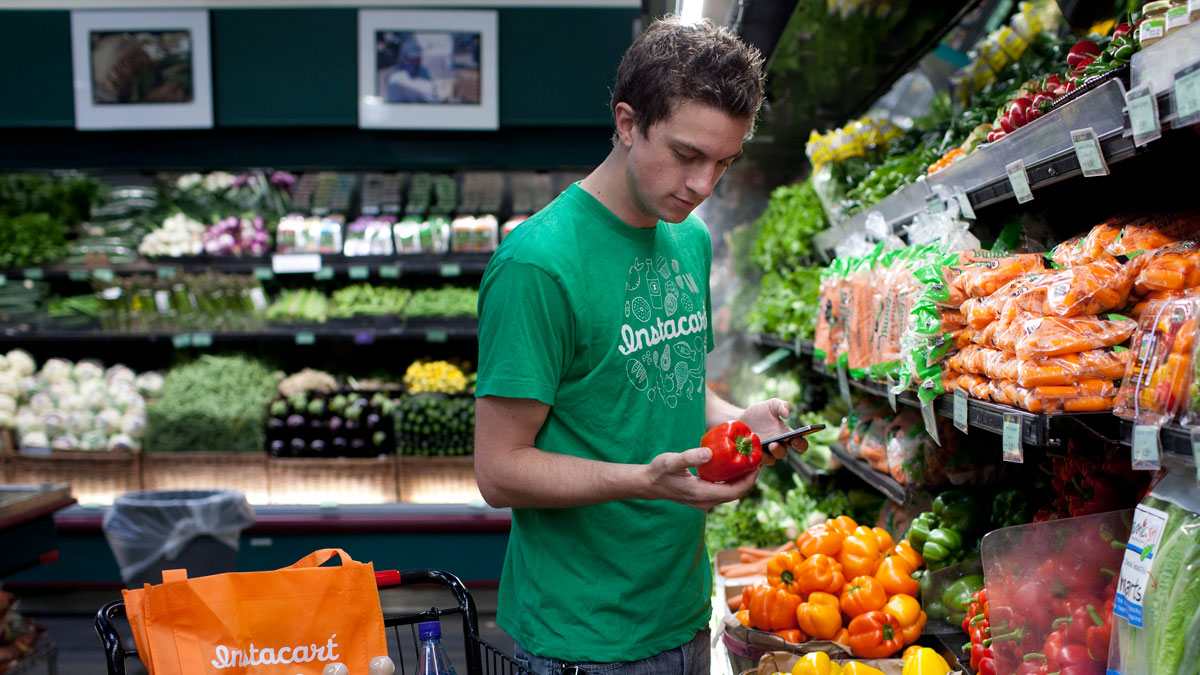 By adminApril 25, 2018May 5th, 2018No Comments
While people may love getting groceries delivered to their door, there’s been one problem with Instacart that has bugged both customers and its shoppers alike: tipping.

It’s a pain point that has plagued the grocery delivery service for years since it changed its checkout process and made the tipping option hard to find in the app. Not only was it difficult to find, Instacart had set the default to zero — a fact that rankled many Instacart shoppers who deliver the orders and saw their tip income decrease and for the customers who wanted to reward shoppers for a job well-done.

That’s changing on Tuesday, as Instacart finally overhauls its checkout process. The company is changing the default tip to 5% of an order total, up from nothing. It’s also lowering the service fee the company takes on each order to 5%, but is making it mandatory.

“We’ve been gathering feedback and working on ways to simplify the checkout process for some time,” Ravi Gupta, Instacart’s COO and CFO, told Forbes. “We’ve heard from some customers and shoppers that the current checkout flow could be better.” 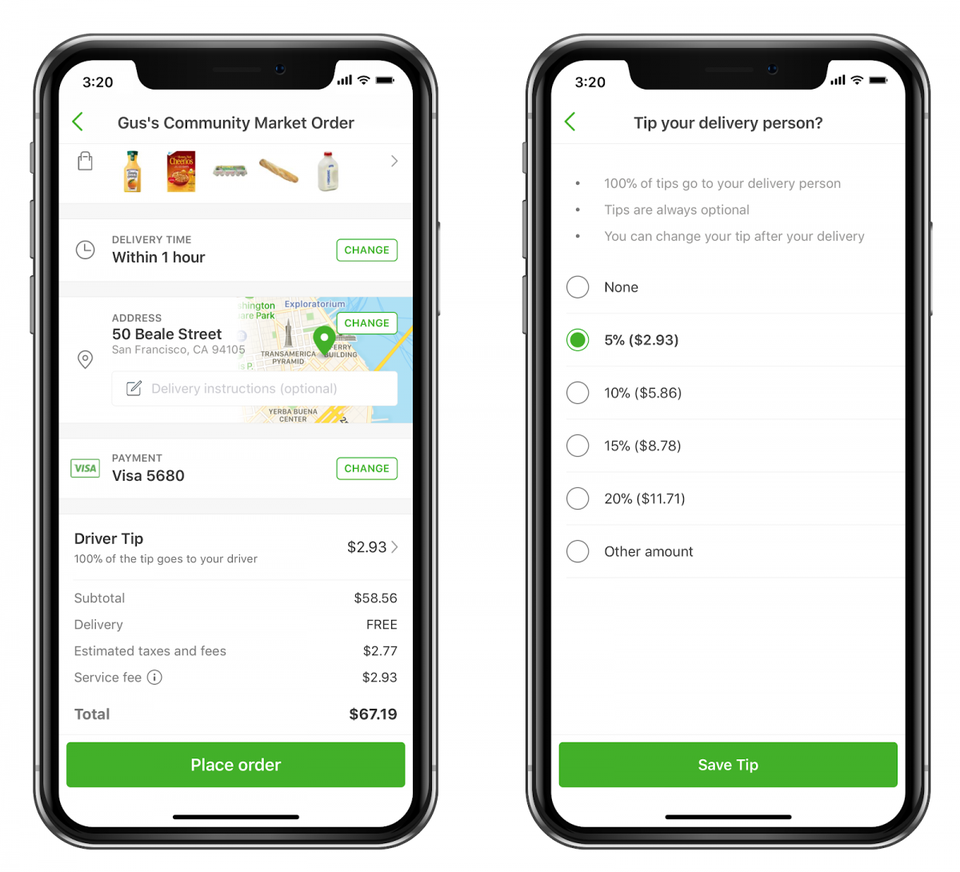 The changes are a long time coming for a feature that has plagued Instacart in both headlines and public reaction. In September 2016, Instacart first removed the option to tip entirely and switched to an optional 10% service fee that was paid to Instacart directly. The backlash was swift, and the company quickly added the tipping option back, but made it hard to find.

Currently, when Instacart customers go to check out, they see a 10% service fee and an option to change or edit that number. The service fee goes entirely to Instacart’s coffers, and the company says it uses it to help pay for anything related to running the company, from background checks to customer support to insurance. The 10% service fee has been optional, meaning shoppers could turn it off and not pay extra. Many customers viewed the service fee as the equivalent of a tip for their driver, but that was never the case.

It was only if customers hit the edit or change button during the checkout that they’d see an option to tip their Instacart delivery person upfront — a default that was automatically set to none. Tech publication Recode accused the company of playing with its workers wages and predicted that it would suffer for it. Instacart also agreed to tweak some of the language as part of a March 2017 settlement agreement in an unrelated case. 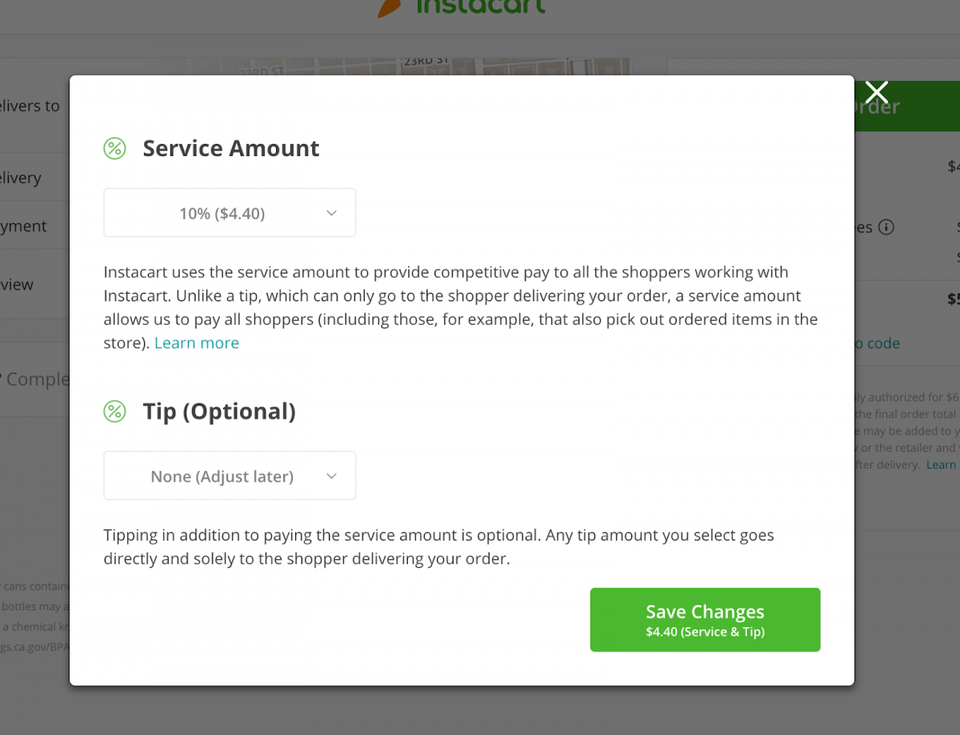 Now, Instacart is overhauling its checkout process and bringing tips back to front and center. The service fee will remain a part of all Instacart orders, but will be reduced to a mandatory 5%. (Instacart Express customers, its membership program, will be able to continue waiving the fee through the rest of their contract.) Update 4/24/2018 at 2:43pm PT: Instacart confirmed it found a bug that has impacted some Express customers ability to waive the fee. It plans to issue credits to any impacted customers

Tips will also be added to the checkout screen and be set at a default of 5%, although customers will have the option to adjust it higher or lower as they wish.

Gupta says the changes are intended to make tipping on Instacart “as simple as possible.”

The changes will also hopefully reduce some of the friction between the startup and its front-line workers after their tumultuous past. Most recently, Instacart had announced in late February that it had accidentally been withholding some tips from workers while over-charging customers. The disclosure was a blow to the already thin trust between the company and its delivery workforce. Now, Instacart will have to wait and see whether bringing tips back to front and center will help it win over both its shoppers and customers.