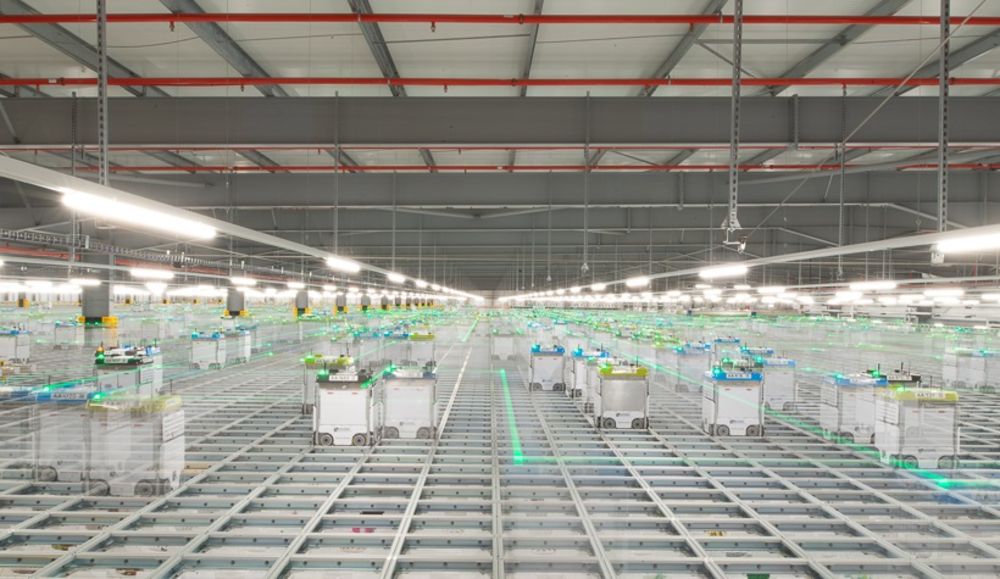 Kroger Co., the giant but aging supermarket chain, has unleashed a flurry of initiatives to ensure it won’t get thumped in a post-Amazon-buying-Whole-Foods world: It is revamping locations, bought a meal-kit company, and sold off its convenience-store business. Its biggest gamble, though, is a partnership with British online grocer Ocado Group Plc. The two plan to build as many as 20 automated grocery warehouses in the U.S. to help Kroger turbocharge its e-commerce operation.

Grocery has proven a uniquely tough business to bring into the online era. Orders often have dozens of items – some frozen, some cold, some room temperature – and much of the inventory is perishable. That simply makes for a different challenge than the one Amazon.com Inc. has successfully tackled by getting a single laptop computer or phone charger on your doorstep in one day.

Ocado has focused specifically on digital grocery shopping for its entire corporate life, and it shows. At its newest online grocery fulfillment center outside London, 1,000 robots zoom around a grid at a speed of four meters (13 feet) per second, extending a gripper to pick up and transport bins of groceries. The system strips out labor costs and enables human workers to pack about 600 items per hour. Every aspect of the fulfillment process is designed for the unique quirks of grocery, including systems that cue workers about what items in a given order they should put in a single grocery bag. (This ensures, for example, that something heavy doesn’t plop onto a dozen eggs.) Ocado estimates its system saves one hour of labor for every 50-item order – no small thing in a segment of retail with notoriously thin profit margins.

There is a real benefit to specializing in solving the grocery conundrum, as Ocado has done. The company’s sales increased 12% last year to 1.6 billion pounds ($2 billion), according to its annual report, and its active customer count increased 11 percent from the previous year. So I’m confident that Ocado will improve Kroger’s game and equip it with advantages in the battle for U.S. market share. Ocado’s system will enable it to fill orders especially quickly and has a high level of accuracy – both important contributors to customer satisfaction. Down the road, it’s not hard to envision even more labor costs getting stripped out of Ocado’s system, enhancing the model’s profitability. But timing is everything in the fast-changing online grocery world. And right now, Amazon and Walmart Inc. are leading the pack.

Neither Amazon nor Walmart has a system with the exact sort of wizardry of Ocado’s; even so, each is exploring its own ways of using automation to help with profitability and customer experience. Walmart is testing driverless cars for grocery delivery, and Amazon recently showed off some new warehouse robots of its own. It will take Kroger up to five years to build out the fleet of Ocado warehouses it has committed to building. I worry that won’t be fast enough to vault it past Walmart and Amazon in the race for online grocery supremacy – no matter how advanced  and efficient Ocado’s system is.

Take, for example, the specialized delivery vehicles Ocado has developed. They can be loaded with racks of grocery-filled bins designed to fit practically every inch of available cabin space and they have a separate compartment for cold items. A routing algorithm helps ensure they are loaded in an order conducive to a driver’s delivery path and that those routes are optimized for efficiency. This sounds way more efficient than some of the solutions Walmart and Amazon use these days, where a DoorDash or Amazon Flex contractor-courier loads up the trunk of his sedan with groceries. But that efficiency gain is only useful if Kroger can get the density of orders to make it count.

Investors have already punished Kroger this year for disappointing on comparable sales growth and its annual profit forecast. It’s hard to assess how much this project might further test their patience, especially because the companies haven’t offered specifics on how they will share the costs of establishing and maintaining these facilities. But we know it won’t be cheap: Kroger has said it is investing $55 million to build the first of the Ocado-powered fulfillment centers.

It might help if Kroger talked up other ways the warehouses could potentially support its business later, such as one day sending replenishment stock to nearby stores. And the new warehouses, in some cases, will be positioned to potentially expand Kroger’s addressable market. One of the first facilities Kroger committed to building is in central Florida, a market that Bloomberg Intelligence analyst Jennifer Bartashus points out is one where regional heavyweight Publix Super Markets Inc. is beloved and ubiquitous and Kroger doesn’t have much presence. Kroger sees opportunity to crack this market with a compelling online offering.

Overall, Kroger is better off for having partnered with Ocado. But I suspect it will turn out this arrangement doesn’t completely jolt the broader U.S. grocery industry the way it could have if it had been forged three or five years ago, before the competition had fully awakened to the e-commerce opportunity. Better late than never.