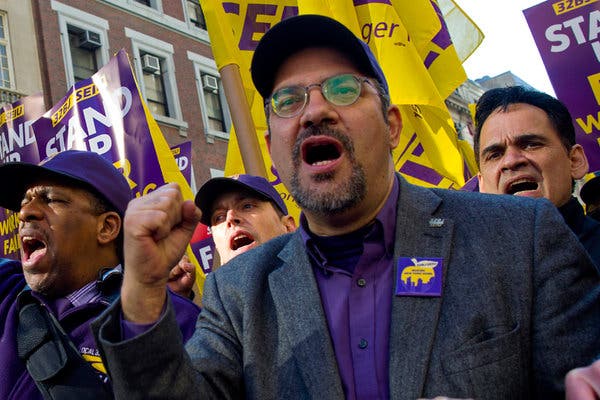 By adminJuly 30, 2019September 20th, 2019No Comments
The mourners came from every corner of the city, thousands filing beneath the soaring vault of Riverside Church to honor Hector Figueroa, among the country’s most dynamic and influential labor leaders. Mr. Figueroa, president of 32BJ S.E.I.U., a New York local of the Service Employees International Union, died of a heart attack on July 11 at 57. His memorial service on Wednesday was part funeral and part political rally, a rousing celebration of the working people and human values that Mr. Figueroa championed.

S.E.I.U.’s ranks consist of the army of low-paid service workers — security officers, window cleaners, health care aides — vital to the American economy and American life. At the church, janitors and fast-food workers, some of them in uniform, sat alongside the governor of New Jersey, the mayor of New York and the New York State attorney general. Generations of the city’s political elite grieved beside generations of labor leaders, Mr. Figueroa’s family and neighbors and the workers he organized and led, many of whom took time off from their jobs.

Donna Hampton, an airport worker, said the work she had done with Mr. Figueroa to organize her formerly nonunion colleagues — who won a $19 minimum wage last year — had changed her life. “I’m sure we’ve all lost one along the way,” Ms. Hampton said, breathing deeply. “But I’m here to tell you, this one really hurts.”

Mr. Figueroa left a city transformed by his work. Across the country, the labor movement has struggled to stand its ground, its hard-fought wins chipped away by the harsh realities of a new economy, and undercut by conservative politicians flush with corporate donations. But over the past decade, New York’s labor movement has been reborn.

Much of that is thanks to Mr. Figueroa, a Puerto Rico-born activist who helped galvanize New York’s unions to grow by organizing nonunion workers. Under his leadership, the union added more than 50,000 members.

Organizing — bringing in new members — was a strategy once fundamental to the labor movement, but it has been largely abandoned in recent decades.

In New York, Mr. Figueroa’s approach gave the movement momentum, helping it secure a series of significant, rapid-fire winsover the past several years.

In one major victory, fast-food workers won a $15 minimum wage after 32BJ helped their campaign, fighting alongside them.

Just as central to Mr. Figueroa’s strategy was building coalitions with workers across different industries, something he believed was critical in the modern economy. Just before his death, Mr. Figueroa had been fighting for protections for taxi drivers, who are part of a separate union. Taxis, covered with flowers and signs that said, “Thank you Hector,” drove slowly by the church.

These coalitions gain power by reaching not just across industries, but also across racial and ethnic lines. The crowd at Mr. Figueroa’s memorial was possibly the most diverse I have ever seen. Outside, men and women of all races wore S.E.I.U.’s signature purple and white shirts, mingling in the summer heat.

It was a tantalizing glimpse of how America can move beyond what divides us to fight for what should unite us — the dream of good jobs, health care, the environment and human dignity. It was a beautiful rebuke of the racism and hatred that has stolen so much from us, that continues to bamboozle us. Labor unions, when led wisely and empowered by motivated workers, can defend democracy itself.

Mr. Figueroa reminded us of this.

“President Trump is trying hard to divide us, but unions can help reverse some of the damage,” Mr. Figueroa wrote in an Op-Ed for The Times published after his death. “We can build a lasting movement that will reduce income inequality, create a country that is fair for all and kick the hatemongers out of office.”