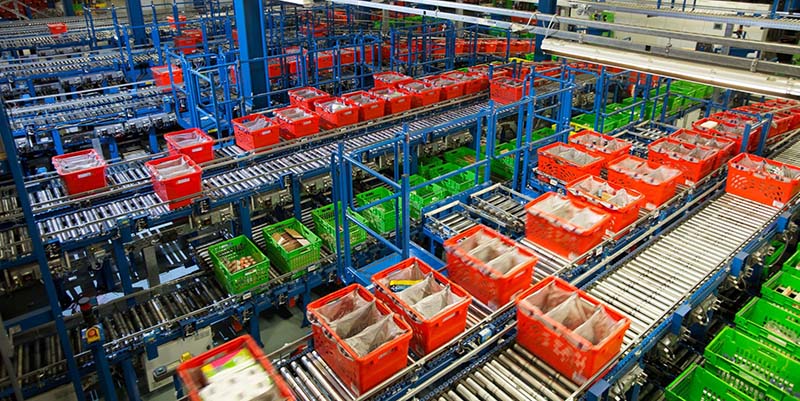 The battle for retail automation has heated up in the U.S., with supermarket giant Kroger signing a deal with a firm named Ocado to build it some futuristic warehouses.

It’s a big play against Amazon, the king of automated fulfillment centers, which is trying to become a major player in grocery deliveries via its Whole Foods buy—and also against Kroger’s more traditional rival, Walmart, which is trying to get better at this online thing.

But what is Ocado, the company whose share price has popped by more than 60% as a result of the Kroger deal?

Ocado started business in the U.K. around the turn of the millennium as an online grocery store—unusual at the time. A couple years later, it became best known as the online delivery partner for the posh British supermarket chain Waitrose.

Over time, Ocado put more and more emphasis on its technology capabilities, and how it could integrate its methods into its automated warehouses and the apps that it designs for retailers. This isn’t merely about robotics—Ocado has also invested significantly in machine-learning techniques (popularly known as artificial intelligence) and the 4G-based communications technology that lets Ocado’s robots communicate among themselves at high speed.

Last year alone, Ocado revealed a collaboration with German, Italian, Austrian and Swiss scientists to develop robot hands that could pick apples without damaging them, a new proprietary computer vision system that allows robots to grasp an item without the need for a 3D model of it, and an open-source package called Kubermesh that’s designed to streamline data centers for smart warehouses.

This is a big, behind-the-scenes tech firm, and recently it’s been signing big deals with supermarket firms around the world—often sending Ocado’s share price soaring.

In November, Ocado signed its first major deal outside the U.K. with Casino, the operator of French supermarket chain Monoprix. That deal popped Ocado’s shares by as much as 28%. Then came Canada’s Sobeys in January, again boosting Ocado’s shares by 28%. At the start of this month, it was the turn of Sweden’s ICA, sending Ocado’s shares up by more than 5%.

The Kroger deal is the biggest yet, and Ocado’s share price is at the time of writing up 64.2% on the news. That pop isn’t just good for Ocado—it’s good for Kroger, which has taken a 5% stake in Ocado for $247 million as part of that tie-up.

Ocado said Thursday that, due to the Kroger deal, it will “discontinue discussions with other U.S.-based retailers.” A spokeswoman for the company declined to specify which retailers Ocado had been talking to.

The Kroger deal will see the U.S. chain build up to 20 Ocado-designed warehouses over its first three years—and if Kroger doesn’t meet those targets, Ocado gets compensation. Over the long-term, the exclusivity of the deal remains contingent on Kroger ordering enough of Ocado’s customer fulfilment centers.

It’s clear that Ocado is quite a catch for Kroger.

“As we work through the terms of the services agreement with Kroger in the coming months, we will be preparing the business for a transformative relationship which will reshape the food retailing industry in the U.S. in the years to come,” said Ocado CEO Tim Steiner.

Kroger CEO Rodney McMullen, meanwhile, said the deal would “speed up our efforts to redefine the food and grocery customer experience.”