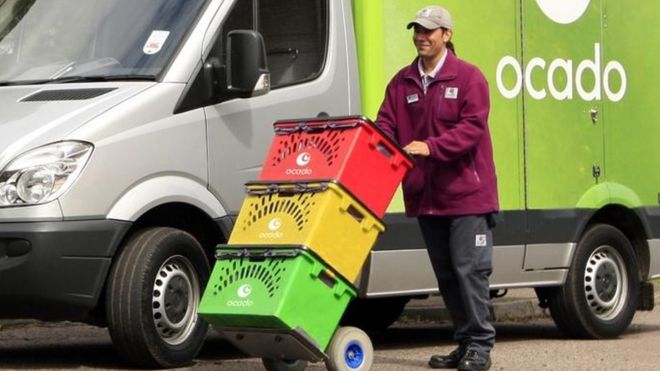 Ocado wages a grocery war against Amazon, Walmart and Alibaba

His patter is honed by a career battling doubters (an analyst once put him down with the quip: “Ocado begins with an ‘oʼ, ends with an ‘oʼ, and is worth zero”). Sceptics still harbour deep reservations. Though Ocado has more than tripled in value in the past two years to £7.5bn ($9.6bn), its share price has plunged recently. But his insurgency shows how the battle to dominate online groceries remains wide open. Ocado has as good a chance as anyone.

Grocery is a sadomasochistic business. Sellers can count on stable revenues but have little margin for error on sourcing, price and waste. Shoppers suffer from a retail version of Stockholm syndrome. They are lured by grocers with the promise of savings, only to be fleeced. Shops make them do the work of picking the produce and bagging it. They set traps in the aisles—in the form of strategically placed celebrity magazines or freshly baked doughnuts—to slow shoppers down. Yet customers continue to return for more, despite having ever more options to order online and have groceries delivered to their doorstep. In China and America, online grocery shopping is a miserly 3.8% and 1.6% of the total, respectively.

Mr Steiner, a former Goldman Sachs bond trader, has pulled off the rare feat of making home-delivery both tolerable for shoppers and profitable for sellers. He knows how to squeeze the last farthing out of a tomato and has turned the sorting of groceries in warehouses into a science—specifically, clever robotics— which has kept costs competitive. Partly thanks to Ocado, Britain trails only South Korea and Japan in its embrace of online grocers.

Earlier this year Mr Steiner persuaded Marks & Spencer, a British retailer, to pay £750m for a half of Ocadoʼs domestic online-grocery business. The money is helping develop his firmʼs newer, more lucrative international venture, which licenses the know-how to build modular high-tech warehouses that can be scaled up as needed. The biggest deal, struck in 2018, has been with Kroger. The American supermarket chain aims to order 20 Ocado customer fulfilment centres (CFCs, or, as Kroger calls them, sheds) by 2021, far more than the four that Ocado has so far erected in Britain (the newest burned down this year). Despite their recent slide Ocadoʼs shares still trade like a software firmʼs, not a supermarketʼs.