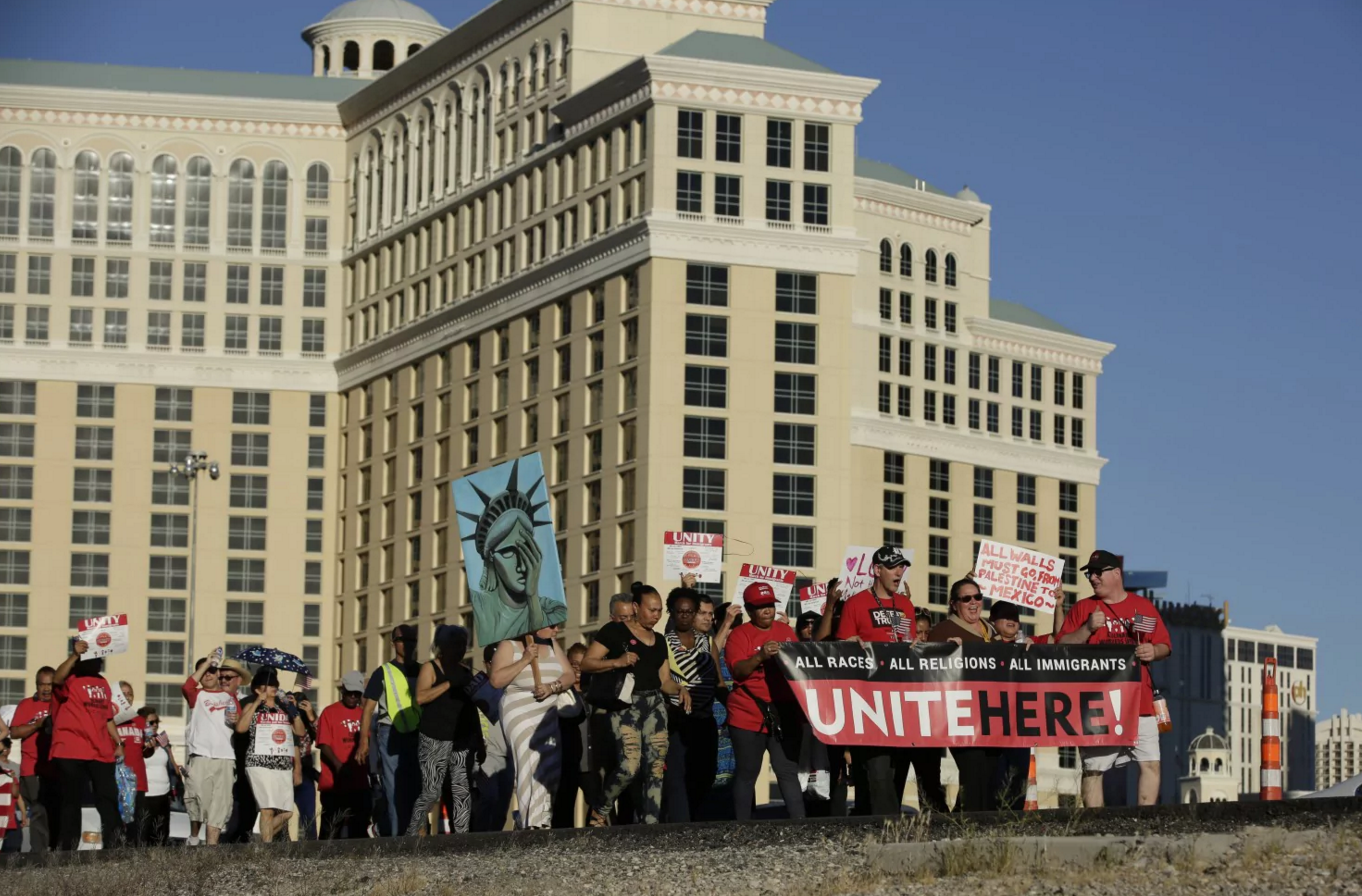 In advance of Labor Day, the Economic Policy Institute just released an important piece on the importance of unions as a force to push back on inequality, wage losses and a political system that fails to represent most Americans. I’ll get into some of the key points in a moment, but first there’s a tough contextual point to consider in this discussion.

When I give talks about economic justice, I always, based on many of the facts in the EPI piece, refer to the importance of unions. There are clear, causal linkages between their diminished share of the workforce and the widespread loss of worker bargaining power. Although many heads nod in agreement, someone always raises their hand and asks, “Sure, but do you really think unions can come back? Isn’t fighting like crazy to slow their demise the best they can do?”

The question comes from the negative trend shown by the red line in the figure below (the first figure in the EPI report). Unionization rates began to decline in the 1960s, accelerated downward in the 1980s (President Ronald Reagan’s firing of 11,000 air traffic controllers whose union, PATCO, was on strike, provided a strong signal to anti-union conservatives), and have continued to fade through the most recent data. Today’s unionization rate is 11 percent, down from a third at its peak in the 1950s. That 11 percent is a weighted average of 34 percent in the public sector but only 6 percent in the private sector.

The questioner’s implicit point is that long-term trends are typically the function of many forces pushing the same way, and that makes them hard to reverse. In this case, those trends range from deindustrialization, which is linked to globalization and our persistent trade deficits in manufactured goods, to, as EPI documents, the growth of deep-pocketed, aggressive anti-union campaigns waged by lobbyists and their congressional allies.

But before we cede the field, look back at the figure, but not at the end of it. Look more toward the left-hand side, in the 1920s and 1930s, when income was just as concentrated as it is today, capital crushed labor, and finance ran amok. The result was, of course, the market crash, the Great Depression, the loss of concentrated wealth, and the rise of collective bargaining. And to be very clear—this point is key—that tripling of union density you see in the chart between the late 1930s and early 1940s, from around 10 to north of 30 percent, was an act of policy, not of nature. That policy was the National Labor Relations Act (a.k.a. the Wagner Act).

In other words, it is wrong to assume that collective bargaining is incompatible with our modern economy. The truth is that our labor laws have not been sufficiently modernized. That has come at great cost: Although correlation is not causation, solid research finds that, unsurprisingly, declining unionization rates and increasing income concentration at the top (see the blue line in the figure) are related. “Among men,” the report notes, “the erosion of collective bargaining has been the largest single factor driving a wedge between middle- and high-wage workers.”

What policy modernizations would help us close that wedge? As the reach between employer and employee becomes more distant in today’s “fissured workplace,” collective bargaining needs to occur by sector, not by firm. Here’s how Larry Mishel, president of EPI and an author of the report, put it to me: “We need a design where people have collective bargaining rights as restaurant workers, as opposed to one where they gain those rights one restaurant at a time.”

Heidi Shierholz, another one of the report’s authors, added that it would also help to “establish substantial penalties for violating labor laws. At this point, there’s very little incentive for employers to follow the law, such as not firing workers who seek to form a union.”

Here are some of the key findings from the report:

That last finding might surprise you, but in a way, it makes perfect sense. We have become terribly divided in recent years by race, by wealth class, even by geography. Perhaps the reason for those high popularity statistics is people intuit that what’s needed is an institution that unites people by their economic conditions and lack of individual voice. Well, there’s a great solution for that, and it’s right under our noses!

I refuse to accept that the trend in unionization can’t be reversed. Sure, it will take a fight, but count me in. What about you?

Jared Bernstein, a former chief economist to Vice President Biden, is a senior fellow at the Center on Budget and Policy Priorities and author of the new book ‘The Reconnection Agenda: Reuniting Growth and Prosperity.’ Follow @econjared
Originally published on WashingtonPost.com
Share Tweet Share Pin