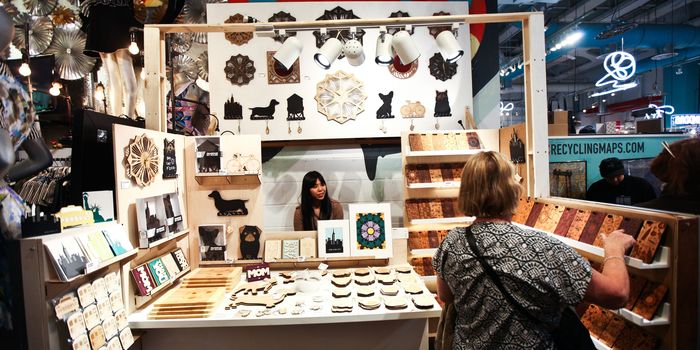 When shoppers at the Artists & Fleas market in Manhattan’s Chelsea neighborhood try to haggle over prices with bag designer Pamela Barsky, she offers the following proposition: Guess the rent on her 10-by-10-foot booth, and she’ll grant a discount.

No one comes close to guessing to the astonishing figure: $7,300 a month.

On a square-foot basis, that’s more than the average rent for retail space in prime Manhattan shopping districts such as SoHo and Herald Square.

The tiny stand, in fact, generates enough revenue to pay 15 full-and part-time employees, including the crew printing and sewing her canvas bags at her Chinatown production shop.

These are tough times for brick-and-mortar retail. Stores are closing locations at a record pace, while chains including the Limited and American Apparel are going belly-up.

If it’s sold from a stall or a folding table, it seems, shoppers can’t get enough of it.

Jen Bailey, director of FAD Market, a weekend showcase for independent artists and designers that pops up in locations around Brooklyn—including the Brooklyn Historical Society this Saturday and Sunday—says that since launching a year ago, vendor numbers doubled and attendance tripled, to 2,000 visitors a day.

The market’s appeal is so strong, she says people volunteer to set up tables, hand out fliers and greet shoppers.

“People want to be a part of it,” Ms. Bailey says.

Artists & Fleas, meanwhile, is opening a new, 5,000 square-foot market on Friday at the prime retail intersection of Prince Street and Broadway in SoHo, the former home of an Armani Exchange.

Co-founders Ronen Glimer and Amy Abrams say artisan markets are thriving because shoppers are hungry for unique goods, not to mention connection.

They choose their merchants based not just on their wares, but personality. A key question: “Is this a fun person?”

On peak days, their Chelsea location attracts up to 10,000 shoppers. That in turn draws merchants willing to pay $65,000 a year for a 50-square-foot booth.

“We might as well be baleen whales scooping up krill,” says jewelry maker Cynthia Rybakoff, who sells her sleek designs at the market. “We don’t have to work that hard to bring people in.”

“There is no advantage to having a storefront other than vanity,” Ms. Rybakoff says.

Artists & Fleas merchant Andrew Cheung, who says he averages $50,000 in sales a month on his line of whimsical men’s accessories including T-Rex socks and boxers shorts, adds that if an item isn’t selling well, it’s not for lack of traffic.

“It’s instant judgment day,” he says. “You get a lot of feedback just by the sheer number of people walking by.”

Of course, the market isn’t a good fit for everyone. Mr. Cheung says that while he has zero interest in opening a storefront, it would allow more freedom.

At Artists & Fleas, management reviews and vets every vendor’s merchandise mix and marketing efforts. There’s a one-time $500 “marketing and merchandising fee,” and a $25 fine if you don’t staff your booth during market hours.

Moreover, everyone has to live with the occasionally quirky choices of the in-house DJ.

But she’s content to remain a humble market merchant.

“Everyone assumes we’re not a real business, which is kind of a lovely way to be,” Ms. Barsky says. “You don’t feel like the man. But you’re making money like the man.”