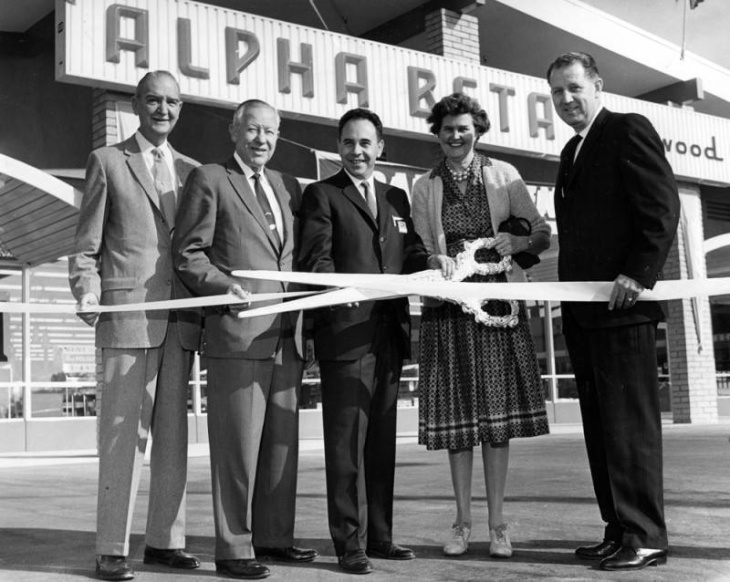 The Lost And Forgotten Supermarkets Of LA’s Past

When Angelenos go food shopping these days, it’s usually at our nearest Vons, Ralphs, Gelson’s, Trader Joe’s or Whole Foods. With two or three corporations controlling most supermarket chains, our options are limited. That wasn’t always the case. Prior to the leveraged buyout and merger mania of the late 1980s and early ’90s, Los Angeles had a bunch of local grocery store chains.

With a potential supermarket strike looming if the workers’ union and store owners can’t agree on a new contract, we thought it was time to take a look at a few of the grocery stores of Southern California’s past.

In 1920, Samuel H. Alexander opened a small, 25′ x 40′ store at the corner of 41st Street and Hooper Avenue in Los Angeles. By 1927, Alexander’s business had grown from the initial location, and he opened one of the first supermarkets in Southern California. The small chain grew to at least 13 stores, most in the San Fernando Valley, with locations in La Canada, Northridge, Van Nuys to Hollywood. The logo for Alexander’s was a thick, lower case “A.” Employees called the logo the “pregnant A,” according to a 1971 Los Angeles Times story. Alexander’s (just as often written without the apostrophe) stayed family-run until it was sold in 1976, with various market chains taking over the locations.

Brothers Albert and Hugh Gerrard opened their first market in Pomona in 1900, soon expanding to Orange County and renaming the chain Triangle Grocery. Sometime in the mid-1910s, they came up with an innovative self-service approach, stocking their markets alphabetically by product. Hence, the name Alpha Beta, which arrived in either 1917 or 1919 (accounts differ). By 1932, the brothers had opened their first two supermarkets, and the chain grew and grew from there. Based in La Habra from 1952, signs featuring the chain’s smiling cowboy mascot, Alphy, became a common sight throughout California. By 1961, there were more than 100 stores. That number had grown to 145 stores in the Southland by the time Yucaipa Companies bought the chain in 1991. In 1994, the company merged with the Ralphs chain and the Alpha Beta name disappeared.

Fun Fact: Due to the Gerrard brothers’ religious beliefs, Alpha Beta stores didn’t sell alcohol until 1975, leading to folklore that the founders were Mormons. They weren’t. They were members of the Disciples of Christ.

Shortly after his father died, teenage Joe Goldstein and two of his brothers began selling fruit door-to-door to support their Boyle Heights family. Soon, they set up a produce stand along Telegraph Road in East Los Angeles. Folks would say they were going to visit “the boys’” stand. The name stuck. By the time the brothers opened their first market on the site in 1924, they were joined by another brother. By 1931, they’d opened what was billed as their first full-service market at Monte Vista St. and Avenue 55 in Highland Park. That market later served as the company’s headquarters through the 1980s. The Boys turned their focus from suburban to urban locations, growing to 54 stores. The business stayed in the Goldstein family until 1988, when American Breco Company bought it. A year later, some suburban store names were changed to Market Basket, evoking a prior SoCal chain with the same name, that had only departed a few years earlier. Just 18 days later, American Breco merged into the Yucaipa Company (sound familiar?). A few stores still operated as The Boys as late as 1993. Then, the name faded into history.

From a humble start selling watermelons off the back of a truck, Wayland H. Crawford and his wife, Leemoria, built a market in Alhambra at Valley and New in 1929. From there, a market was built at the corner of Valley and 9th. In 1937, a Crawford’s store opened at El Monte’s Five Points. Billed as “The Biggest Country Store in the World”, the huge FIve Points location sold pretty much everything. In 1941, the Crawfords went through a contentious split — Leemoria “accidentally” shot Wayland. He refused to press charges and, in the final divorce, she was granted stock in the company. The chain continued to grow, with stores primarily in the San Gabriel Valley. There were also locations in Glendale and Orange County. In 1964, the western-themed Crawford’s Corner was built at the site of the original market. That store became a Market Basket in March of 1976. Crawford’s continued at a much smaller scale, with stores operating into the early 1990s. The last Crawford’s closed in Norwalk in 2007.

Dale’s If you grew up in the San Fernando Valley prior to 1984, you probably remember Dale’s. The beginnings of the valley chain aren’t certain due to conflicting accounts, but founder Joseph Dale opened a store — in either 1929 or 1930 — in Glendale or on Pasadena Avenue in Los Angeles. The Sun Valley-based, family-run chain grew to 11 stores before selling out to Northern California-based Lucky Stores Inc. in 1984. The reason? It was too hard to compete with the major chains. The company continued to operate 10 Dale’s Junior Market convenience stores, also mainly in the San Fernando Valley.

After spending his career operating Thriftimart stores, Joseph Hughes opened a store under his name in Granada Hills in the mid-1950s. From there, Hughes Family Markets grew into a familiar sight around greater Los Angeles. They had more than 50 stores by the time Seattle-based Quality Food Centers bought the chain in November 1996. As part of the agreement, stores continued to operate under the Hughes name, something that only lasted until the merger with Ralphs, a year later, which again involved the Yucaipa Companies. About a year after the merger, Ralphs signs replaced Hughes signs.

Fun Fact: Roger Hughes ran the stores from the time his father died until the merger. After that, he started another chain, HOWS Markets, a name derived from the initials of the surnames of Hughes and his partners.