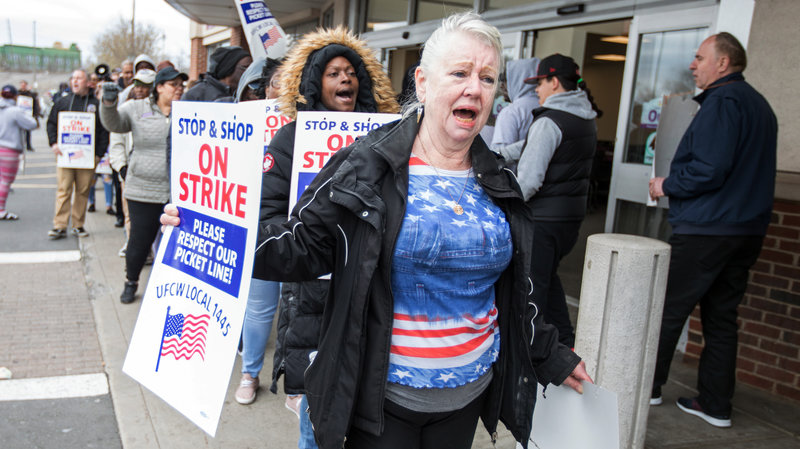 The next wave of labor unrest could be in grocery stores

Grocery workers in the Pacific Northwest are demanding higher wages and an end to the gender pay gap that permeates their stores. They have established proof for the latter, commissioning a third-party group to produce a report on the issue. The research group Olympic Analytics looked at the data on hourly wage, gender, age, years of Fred Meyer experience, and job title for 1,919 Fred Meyer workers employed in the area. It found that women are almost twice as likely to be given lead positions, but make about an average of $1.68 less than their male counterparts at those positions. In 2018, nearly 80% of the store’s bakery employees were women, while the higher-paying produce department was male-dominated. The gap between these two departments has barely shifted over the last 81 years: The pay gap between the two departments was 27.3% in 1937 and had only dropped to 21.5% by 2018.

Jane Thompson has been working at a Fred Meyer store in Bend, Oregon for 18 years, and has been in the Seafood Department for 12 of them. She hopes the strike authorization vote will lead to better pay for her and her co-workers. “The company keeps taking more and more away from us,” she told In These Times. According to the U.S. Census, the population of Bend increased by almost 30% between 2010 and 2018. While the boom has meant more customers, Thompson said it hasn’t meant additional hires or higher pay. “I’m doing the job of two people now,” said Thompson.

Ann Poff is a member of the union’s bargaining committee and has worked as a deli clerk at Safeway for nearly 22 years. She currently makes $1.85 above minimum wage, but the minimum wage is set to increase in Oregon over the next few years. This means that she’ll make just $1.45 above minimum wage for two years, before making just 75 cents above it in the year after that. “The minimum wage is going up, but our wages are going down,” she reasoned. According to Poff, when she once asked to be transferred to a different position, her request was denied despite having spent over 20 years on the job. A male co-worker with less than a year of experience was allowed to switch to the position instead, she said.

At the last bargaining meeting, the employers actually offered a proposal that inexplicably paid many departments less than minimum wage by the year 2022. When confronted about this fact, management offered a mere dime over the state’s minimum wage. “Fred Meyer/Kroger seem to be oddly comfortable being known as the grocer who profits off the devaluation of their workers…specifically women,” said the union in a statement.

Local 555’s president has indicated that there is a “high likelihood that we will see an economic action taken against stores in the near future” and has promised to release details before September 10. Meanwhile, California grocery workers at Ralphs, Albertsons, Vons and Pavilions stores have been working without a contract since March and have already voted to authorize a strike. On September 8, it was announced that the union and the employers had reached a tentative deal, but members have yet to vote on it and no details have been released.

This isn’t the first labor fight that has gripped the grocery industry this year. In April, roughly 31,000 employees at the New England grocery chain Stop & Shop went on strike at over 240 stores. The workers, who were also represented by the UFCW, were fighting against attacks on their pensions, rising healthcare costs, and the potential elimination of certain overtime pay. After striking for 11 days, the union agreed to a new contract and announced that the company had met their major demands. Ahold Delhaize, Stop & Shop’s parent company, says that the strike cost them $345 million.

That number might be frightening for the grocery employers currently facing potential strikes, but it’s also caught the eye of right-wing, anti-labor forces. The National Right to Work Legal Defense Foundation aims to damage organized labor by fighting compulsory union membership in courts. Most notably, it was one of the groups that represented child support specialist Mark Janus, who ultimately achieved a massive victory for the political right at the Supreme Court. The group has filed two unfair labor practice charges against Stop & Shop for an employee named Matthew Coffey who opposed the strike.

Sam Hughes is a social media coordinator at UFCW and a former deli worker at Fred Meyer. Hughes, who prefers “they” pronouns, told In These Times that they had to work additional jobs because they often couldn’t get enough hours from the store. “I found myself being paid low wages on food stamps, cutting deals with my landlord just to afford below-market rent,” said Hughes. Hughes also said the strike authorization vote was a way to fight against the “dehumanization of workers,” and that related labor victories throughout the country underscored an important point: “There’s a lot more of us than there are of them.”