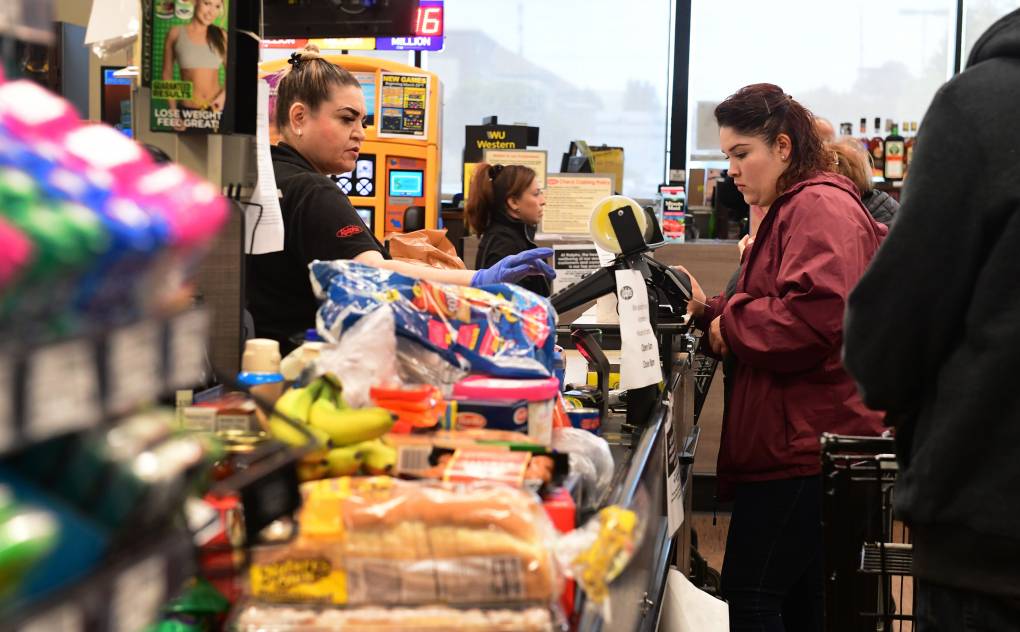 The Pandemic’s Toll On Essential Workers In California

Many people who still have jobs are working from home during this pandemic. But not the cashiers who ring up groceries, nor the gig worker couriers who deliver them if customers order online instead. Not hospital and nursing home staff. Not janitors and security guards. Not farm and factory workers.

Essential workers are still out there doing their jobs every day – and the push to reopen businesses could put them in even more danger as more people get back out there.

Some front-line workers have already paid a heavy price. An Instacart grocery delivery worker is on a ventilator in San Francisco, the company confirmed to Race and Coronavirus. Grocery store workers are getting sick, and have died in San Jose, Pasadena and elsewhere. Health care workers are dying, too.

Vanessa Bain, a Bay Area resident who stopped working for grocery delivery app Instacart in March, couldn’t afford to risk her loved ones’ health. She helps care for her three grandparents who are in their 70s, 80s and 90s, she said on the Race and Coronavirus podcast.

“It’s not possible for me to work safely, especially when I potentially can transmit (COVID-19) to them,” she said.

Bain continues to organize other workers, and helped stage an Instacart shopper walkout in March to demand hazard pay and extension of sick pay, which the company is offering only to its independent contractors who are diagnosed with or quarantined because of the novel coronavirus. She mentioned the San Francisco Instacart shopper who contracted COVID-19 and is on a ventilator, saying he was initially denied benefits by the company.

Instacart said in a statement to Race and Coronavirus that it is now providing that shopper with benefits, but would not provide further information. “Our hearts go out to Alejandro’s family and loved ones during this challenging time – the entire Instacart team is wishing him a safe recovery. Our team has been in direct contact with his family to offer support through our extended pay financial assistance program.”

Among the many shortcomings in our economic system the coronavirus crisis has exposed is “that we don’t have an adequate social safety net, not just for independent contractors, but for employees as well,” said William Gould, professor emeritus at Stanford University and a former chairman of the National Labor Relations Board. Even some employees with benefits have inadequate sick leave, he said, pointing out that a few days of leave are not enough for someone with COVID-19, who often has to quarantine for 14 days.

And many essential workers are minorities or immigrants, according to different surveys and studies.

“Recognizing that communities of color are disproportionately impacted,” the National Council for Occupational Safety and Health recently released recommendations for worker safety in its report “A Safe and Just Return to Work,” said Jessica Martinez, co-executive director of the organization. The report calls for health and safety protections, inclusion of employees and unions in planning a return to work, screening, testing, contact tracing, isolation and epidemiological surveillance and more.

One of the provisions U.S. Rep. Ro Khanna, a Democrat who represents parts of Silicon Valley, is pushing for in the Essential Workers Bill of Rights, which he co-wrote with Sen. Elizabeth Warren, D-Massachusetts, is that the Occupational Safety and Health Administration be required to issue an Emergency Temporary Standard to keep workers safe. The congressman said on the Race and Coronavirus podcast that he was most hopeful that safety requirements would be part of the next stimulus package.

“I think right now everyone can agree that, at least, workers have to have basic safety,” Khanna said. “Why would you want to have people go to work where they may get exposed to a disease?”

Are other worker-friendly policies possible, even during a time when tens of millions of people are out of work? Catherine Fisk, a professor at UC Berkeley who teaches labor and employment law, thinks so.

“In the 1930s, the last time we faced unemployment numbers as high as they are right now, state and federal governments enacted a wide array of employee protective measures because the public realized that the particular version of capitalism that resulted in the Great Depression wasn’t working and needed modification,” she said.

Another gig worker, Jon Wong, said on the podcast that he has cut back on doing food deliveries for DoorDash-owned Caviar in California because he’s concerned about the risk. He’s down to about 10 to 15 hours from his usual 20 to 30 hours a week.

“Thankfully, I have a full-time job and this is just a side gig,” Wong said. “I can’t imagine those who have this as their sole or main gig. How do they weigh the benefits? They don’t have the luxury of taking an extra hour or two off (a day) that I do.”

Companies that employ gig workers consider them independent contractors. They have no minimum wage and no benefits. Assembly Bill 5, a new California law that would likely force companies to classify gig workers as employees, could change that. The state recently sued Uber and Lyft for non-compliance with AB 5, in a case that has implications for other companies whose business models are based on minimizing labor costs by hiring contractors.

“I am hoping it is the beginning of the end for predatory practices of the gig companies,” said Edan Alva, a Bay Area Lyft driver who helps organize workers. He stopped driving in April as rides dried up and to avoid the health risk. “By the time I stopped I was earning $5 an hour,” he said.