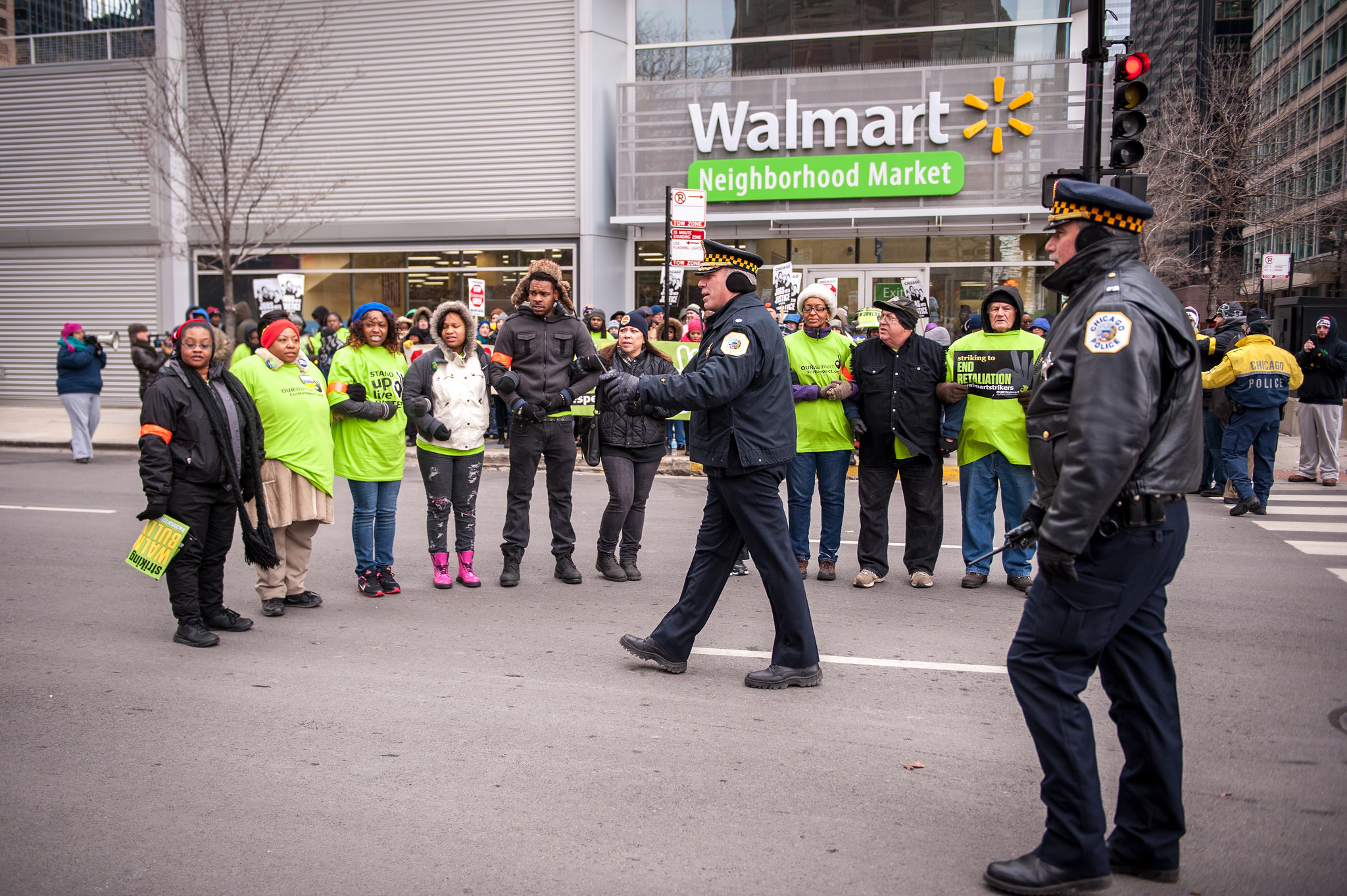 The Shocking, Unmatched Pains That Walmart Took to Avoid Unions

One reason that Wal-Mart workers have always had difficulty improving their lot is that they’ve never been able to form a union. At its core, Wal-Mart’s rationale for being against organized labor was not unlike that of Kodak, say, or General Electric under Lem Boulware: management had an open door policy, by which any worker could ostensibly walk in and discuss anything. Therefore, as Wal-Mart laid out in its “Manager’s Toolbox to Remaining Union Free,” “we do not believe there is a need for third-party representation. It is our position every associate can speak for him/herself without having to pay his/her hard-earned money to a union in order to be listened to and have issues resolved.”

Yet unlike Kodak, which tried to frustrate union organizers by keeping its workers happy with good wages and princely benefits, Wal-Mart has been reliably ungenerous. And unlike GE, which fought tooth and nail against the International Union of Electrical Workers but ultimately honored its right to exist, Wal-Mart has never allowed so much as a single one of its stores to be organized. Indeed, ever since Mr. Sam’s time, the company has done everything it can to crush the unions, painting them in the most Manichean terms. They are “nothing but blood-sucking parasites living off the productive labor of people who work for a living!” said attorney John Tate, an iron-willed right-winger whom Walton had hired to help beat back the Retail Clerks in the early 1970s and who then stuck around at Wal-Mart where he developed an array of antiunion techniques.

In the early 1980s, when the Teamsters attempted to represent employees at two Wal-Mart distribution centers in Arkansas, Walton himself showed up with a warning—US labor law be damned. Recalled one worker: “He told us that if the union got in, the warehouse would be closed. … He said people could vote any way they wanted, but he’d close her right up.” The Teamsters lost the election.

But it wasn’t just top executives who were expected to resist being organized. “Staying union free is a full-time commitment,” read a manual given out at a Wal-Mart distribution center in Indiana in 1991, the year before Walton died. “Unless union prevention is a goal equal to other objectives within an organization, the goal will usually not be attained. The commitment to stay union free must exist at all levels of management—from the chairperson of the ‘board’ down to the front-line manager. Therefore, no one in management is immune from carrying his or her ‘own weight’ in the union prevention effort. The entire management staff should fully comprehend and appreciate exactly what is expected of their individual efforts to meet the union free objective. The union organizer is a ‘potential opponent’ for our center.”

The main thing that a Wal-Mart manager was supposed to do when he or she caught even a hint of union activity was to contact corporate headquarters via a special hotline. Immediately, a “labor team” would be sent from Bentonville to the store where union organizers might be gaining even the slightest toehold. This squad from HQ would then take over the running of the place, putting workers on a steady diet of antiunion propaganda videos; weighing whether local managers were too timid or sympathetic to labor and should be ousted; and keeping a close eye on any employees agitating for a union or simply disposed to having one. “As soon as they determine you’re prounion, they go after you,” said Jon Lehman, who was a Wal-Mart manager in Kentucky for seventeen years. “It’s almost like a neurosurgeon going after a brain tumor: we got to get that thing out before it infects the rest of the store, the rest of the body.”

Much of this strategy evoked the way that GM and other companies deployed Pinkertons to bully the unions way back in the 1930s. “I had so many bosses around me, I couldn’t believe it,” said Larry Adams, who worked in the tire and lube express department at a Wal-Mart in Kingman, Arizona, which grabbed the labor team’s attention in the summer of 2000. With temperatures soaring well above a hundred degrees, Adams and some of his fellow automotive technicians got angry when their boss wouldn’t spend the $200 needed to fix a broken air conditioner. So they reached out to the United Food and Commercial Workers union. Within forty-eight hours, twenty outside managers were crawling all over the store. “It was very intimidating,” said Adams. The UFCW’s organizing push in Kingman would end in defeat; within a year or so, nearly every one of the union supporters would be fired or compelled to quit.

At a Wal-Mart Supercenter in Jacksonville, Texas, a group of meat-cutters had better luck at organizing—though not for long. A week or two after they voted to join the UFCW in February 2000, the company announced that it would cease cutting meat and switch instead to selling prepackaged beef and pork at all of its stores. Wal-Mart said that the butchers’ seven-to-three vote in favor of the UFCW had nothing whatsoever to do with its decision to stock “case-ready” meat. Yet it was all but impossible to miss that the move essentially eviscerated the union’s first ever victory at the company, as Wal-Mart successfully argued that the changes to the meat department made it so that collective bargaining wasn’t appropriate going forward. The UFCW challenged the company’s stance before the National Labor Relations Board, but after eight years of rulings by the agency and the courts, the union could claim only a partial win; Wal-Mart would escape being unionized.

The dust-up in Texas was far from unusual. In all, unions filed 288 unfair-labor-practice charges against Wal-Mart between 1998 and 2003. Most alleged that the company had engaged in improper firings, threatened employees if they tried to organize, carried out surveillance, or illegally interrogated workers to determine their views on labor-related matters. Of these charges, the NLRB found ninety-four of them to be substantive enough to issue a formal complaint against the company. Still, none of it was enough to shake Wal-Mart’s conviction that organized labor needed to be stopped at all costs. “I’ve never seen a company that will go to the lengths that Wal-Mart goes to, to avoid a union,” said consultant Martin Levitt, who helped the company hone its attack before writing a book titled Confessions of a Union Buster. “They have zero tolerance.”

But if Wal-Mart was particularly strong-minded in its opposition to organized labor, most other companies weren’t too far behind. For example, at a Coca-Cola bottling plant in Yuma, Arizona, a manager told employees in 2002 that they’d lose their 401(k)s if they voted to be represented by the United Industrial, Service, Transportation, Professional, and Government Workers of North America. The union lost the election by a vote of eleven to ten. At a General Electric subsidiary in Muskegon, Michigan, which hadn’t been organized, a machine operator named Michael Crane began to hand out literature promoting the Electrical Workers and wear a union T-shirt on the job, only to find his manager repeatedly asking him, “Don’t you have a better shirt to wear?” If this was overly subtle, the company’s subsequent action wasn’t: it fired Crane on a bogus accusation of substandard workmanship.

It wasn’t always like this. In the 1960s, when some 30 percent of the private-sector workforce in America was still unionized, employers were generally cautious about how far they’d go in trying to repel organized labor. “They were as nervous as whores in church,” said one corporate adviser. “The posture of major company managers was, ‘Let’s not make the union mad at us during the organizing drive or they’ll take it out at the bargaining table.’” By the 1980s, a whole industry had sprung up to assist business: “union avoidance” consultants, lawyers, psychologists, and strike-management firms. The more enfeebled the unions became, the more forcefully employers then acted. By the 1990s, even companies that had once accepted unions as a fact of life were now totally defiant.

“The most intense and aggressive antiunion campaign strategies, the kind previously found only at employers like Wal-Mart, are no longer reserved for a select coterie of extreme antiunion employers,” Cornell University’s Kate Bronfenbrenner wrote in an analysis of how business conducted itself during representation elections from 1999 through 2003. Specifically, she discovered that companies threatened to close the facilities where employees were trying to organize in 57 percent of elections, raised the possibility of cuts to wages and benefits in nearly half, and went so far as to actually discharge workers a third of the time. Over the years, employers also became adept at delaying union elections so that they had more time to coerce workers to see things their way.

All of this proved highly effective. Even if the NLRB ruled that a company had illegally dissuaded employees from organizing, the price to pay was typically small—about $200,000 in penalties—compared with the many millions of dollars that could be saved by ensuring that union negotiators never got a shot to bolster workers’ earnings, retirement plans, and health-care benefits.