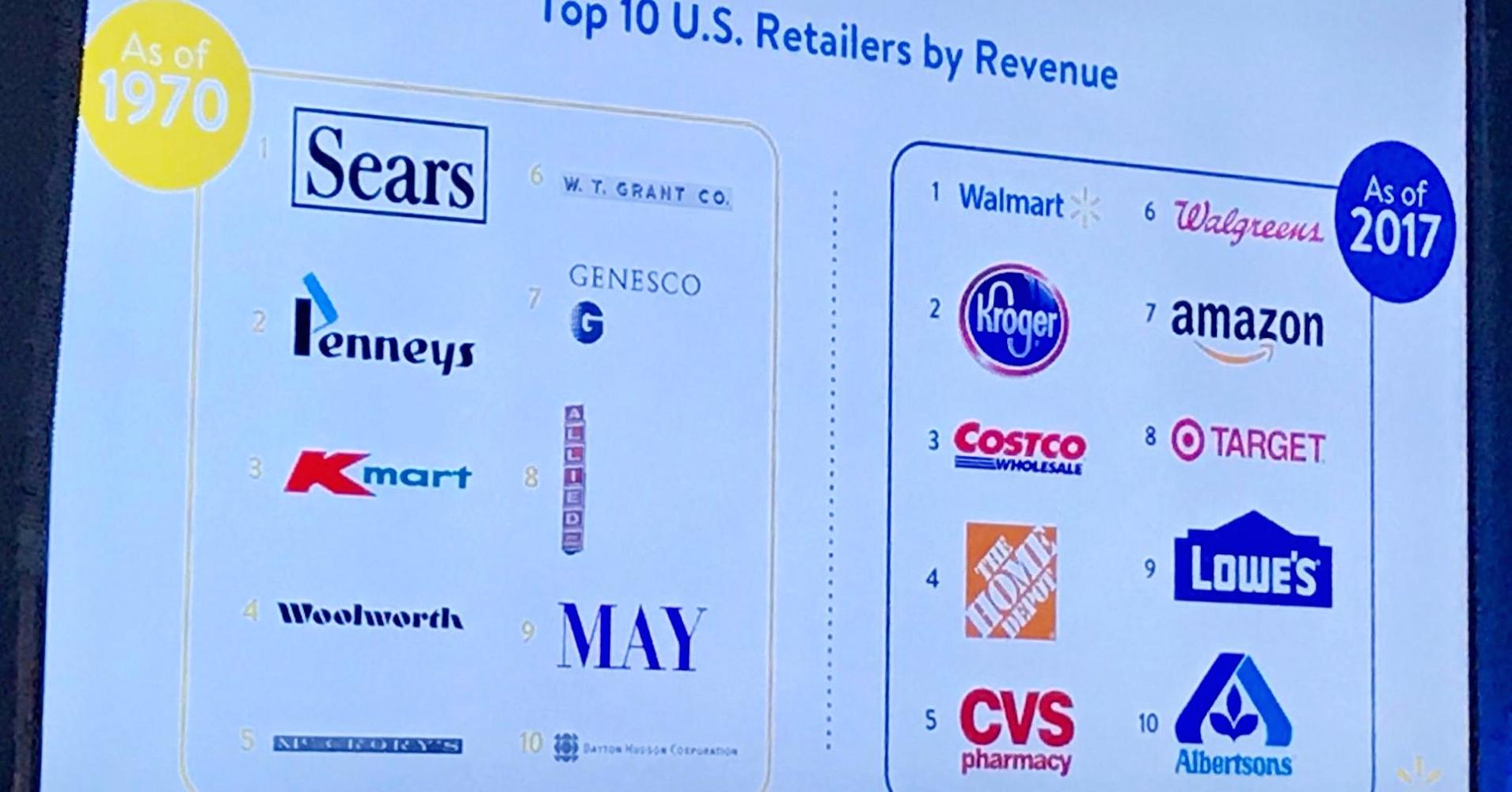 This one image keeps Walmart up at night. Here’s what the company is doing about it

A picture is truly worth a thousand words.

Speaking at a media briefing at Walmart‘s annual shareholders meeting this week in Bentonville, Arkansas, Chief Marketing Officer Tony Rogers highlighted an image that depicts a stark contrast between the top retailers in 1970 compared with last year.

The list on the left includes names like Sears, J.C. Penney and Kmart. An updated version includes Walmart in the No. 1 position, followed by fierce competitors Kroger, Costco and of course Amazon. None of the companies on the left made it to the right, nearly half a century later.

The fear for Walmart now is falling off the current list within a few decades. The company is testing many new initiatives both in stores and online to compete. Rogers said those retailers that are afraid of change are the ones that end up lagging behind.

CNBC visited a Walmart supercenter in Arkansas this week, where the company has been piloting some new technology that could eventually roll out to additional locations. Below are five things Walmart is working on to improve the shopping experience.

Walmart has been testing the Bossa Nova scanner, or its version of a robot, in 50 stores across the U.S. It roams through the aisles roughly three times per day, scanning shelves and finding areas where Walmart needs to stock more inventory. It can also help identify when an item is on the wrong shelf. Walmart says the robot helps save its employees time that can be spent in other areas of a store or helping customers.

A conveyor belt in the back

In a handful of the backrooms at Walmart’s stores today, you will find a conveyor belt mechanism known as the “FAST un-loader.” Trucks full of merchandise can roll up directly to the system, where workers move boxes onto the belt to be scanned and sorted automatically based on their priority and specific department (i.e., dry goods, electronics or apparel) in the store. Walmart says the process of moving boxes from a truck and onto shelves used to take eight employees per shift but now only uses four.

Coming soon to your Walmart mobile app: store maps. The company is creating maps unique to each of its more than 4,000 locations to help shoppers better navigate the aisles and find what they need in a pinch. The function will also be tied to shoppers’ lists in the app, guiding them to the milk, bread and eggs and other items they’re seeking. This could be especially helpful in a Walmart supercenter, which can be more than 180,000 square feet.

Walmart wants to make one of shoppers’ least favorite tasks — making a return — less of a hassle. The retailer has rolled out “mobile express lanes” in stores. There, a shopper can initiate the return process within the Walmart app, scan a QR code once they get back to the store, and get their refund on demand. In the “services” section at Walmart stores, the lanes are easy to get to and always staffed.

Walmart could soon become a bigger threat to Best Buy. You might soon notice the entertainment section of your local Walmart store looks a little different. The retailer has been opening up the space, putting a bigger emphasis on laptops and its massive wall of flat-screen TVs. The company is also more focused on bringing in top-selling brands at an affordable price, like Lenovo.