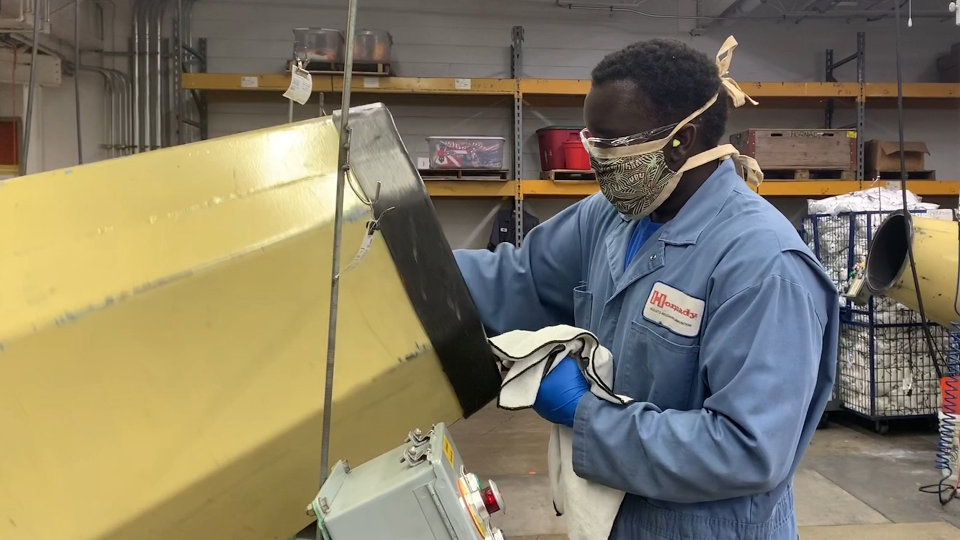 Deboning livestock and slicing up chickens has long been hands-on labor. Low-paid workers using knives and saws work on carcasses moving steadily down production lines. It is labor-intensive and dangerous work.

Those factory floors have been especially conducive to spreading coronavirus. In April and May, more than 17,300 meat and poultry processing workers in 29 states were infected and 91 died, according to the U.S. Centers for Disease Control and Prevention. Plant shutdowns reduced U.S. beef and pork production by more than one-third in late April.

Meatpackers in response spent hundreds of millions of dollars on safety equipment such as personal protective gear, thermal scanners and workplace partitions, and they boosted workers’ pay to encourage them to stay on the job.

They also are searching for a longer-term solution. That quest is playing out in a former truck-maintenance shop near the Springdale, Ark., headquarters of meatpacking giant Tyson Foods Inc. There, company engineers and scientists are pushing into robotics, a development the industry has been slow to embrace and has struggled to adopt.

The team, including designers who once worked in the auto industry, are developing an automated deboning system destined to handle some of the roughly 39 million chickens slaughtered, plucked and sliced up each week in Tyson plants.

Tyson, the biggest U.S. meat company by sales, currently relies on about 122,000 employees to churn out about 1 in every 5 pounds of chicken, beef and pork produced in the country. The work at Tyson’s Manufacturing Automation Center, which opened in August 2019, is speeding the shift from human meat cutters to robotic butchers.

Over the past three years, Tyson has invested about $500 million in technology and automation. Chief Executive Noel White said those efforts likely would increase in the aftermath of the pandemic.

The Covid-19 pandemic has been a debacle for the $213 billion U.S. meat industry. For the first time in memory for some Americans, there wasn’t enough meat to go around. Reduced production forced grocery giants such as Kroger Co., Costco Wholesale Corp. and Albertsons Cos. to limit how much fresh meat shoppers could buy in some stores. Fast-food chain Wendy’s had to tell customers that some restaurants couldn’t serve hamburgers.

Now automation projects are racing ahead, said Decker Walker, a managing director with Boston Consulting Group, or BCG, who works with meatpackers. “Everybody’s thinking about it, and it’s going to increase,” he said.

Automation has transformed jobs such as car assembly, stock trading and farming. Meat processors, though, employ 3.2 workers per 1,000 square feet of manufacturing space, three times the national average for manufacturers, according to data compiled by BCG. While U.S. manufacturing worker density overall has held steady over the past five years, in meat plants it has increased, according to the firm.

Executives of Tyson and other meat giants, including JBS USA Holdings Inc. and Cargill Inc., say that is because robots can’t yet match humans’ ability to disassemble animal carcasses that subtly differ in size and shape. While some robots, such as automated “back saw” cutters that split hog carcasses along the spinal column, labor alongside humans in plants, the finer cutting, such as trimming fat, for now largely remains in the hands of human workers, many of them immigrants.

Workers in the animal slaughtering and processing industry, including some not working on processing lines, were paid an average $15.92 an hour in 2019, according to the Bureau of Labor Statistics.

A skilled loin boner can carve a cut of meat like filet mignon without leaving too many scraps on the bone, which have to be turned into lower-value products like finely textured beef, a low-cost trimming used in hamburger meat, or dog food, said Mark Lauritsen, an international vice president for the United Food and Commercial Workers International Union, which represents many meatpacking workers. For beef companies, that’s the difference between meat selling wholesale at $5 a pound and 19 cents a pound, he said.

“Labor is still cheaper, and humans can do those skilled jobs much better than machines can,” he said.

Meat companies have raised hourly pay in recent years in response to a tightening U.S. labor market. Adjusted for inflation, though, average meat-processing wages have fallen 50% since 1975, according to University of Missouri history professor Chris Deutsch.

While meat processing overall has grown safer in recent years, it remains one of the more hazardous jobs in the U.S. economy, according to the Bureau of Labor Statistics. With 4.3 workplace injuries or illnesses per 100 full-time workers in 2018, the industry’s rate is nearly 40% higher than the national average for all industries, surpassing logging, mining and construction. Animal slaughter and processing facilities logged 23,500 nonfatal injuries and illnesses in 2018, the latest year for which data is available, though such data is marred by underreporting, according to the U.S. Government Accountability Office.

Bashar Abdulrazzaq, an Iraqi refugee, said he lasted less than a year at Tyson’s Perry, Iowa, pork plant. After an eight-hour shift carving meat from the backs of hogs, Mr. Abdulrazzaq said, his fingers often were locked in place and he had to pry open his hand to begin work the following morning. Lower back pain, caused by moving heavy carcasses, ultimately drove him from the job, he said.

“Doing that for eight hours a day nonstop,” he said, “it’s not human.”

Tyson said it has invested in ergonomics and other changes to make jobs less physically demanding, including automated carcass split saws and spare rib pullers at the Perry plant. It said the position Mr. Abdulrazzaq held has been eliminated after the company installed a less labor-intensive production process.

Roughly 585,000 people work in U.S. meatpacking plants. Plant workers cycle in and out of jobs rapidly, with annual turnover in meat plants ranging from 40% to 70%, according to Boston Consulting Group, versus an overall 31% average for manufacturers.

Problems keeping plants staffed predate the pandemic. Plants struggle to draw enough workers to small towns in the South and Midwest that house most of the industry’s plants. Refugees, who can legally work in the U.S., and immigrants, including those who can’t, make up a significant portion of the workforce.

Difficulties recruiting workers have been an impediment to expanding plants and building new ones, executives said. “The biggest push that we have in terms of automation over the last five years is because of the availability of labor in the U.S.,” said Andre Nogueira, chief executive of JBS USA, a unit of Brazilian meat company JBS SA.

Covid-19 compounded that problem. As the pandemic spread in March and April, hundreds of workers stayed home from plant jobs across the country, according to meat company and union officials. Meat companies responded by erecting partitions between workstations and break room lunch tables, installing automated temperature scanners and distributing masks and gloves.

Meatpacking companies have tested automated cutting systems before, with mixed results. Some projects were abandoned after wasting too much high-value meat, industry officials said. Poultry processors have successfully automated some steps, such as the job of “gut snatchers,” who removed birds’ entrails, partly because chickens tend to vary less in size than do cattle and hogs.

A growing consumer appetite for products such as deboned chicken and skinless meat has required more people on processing lines. Decades ago, most Americans bought whole chickens. McDonald’s Corp. ’s introduction of Chicken McNuggets in the 1980s changed that. Roughly 85% of chicken eaten in the U.S. today is parts like breasts and wings or products such as chicken fingers, according to the National Chicken Council.

JBS, the world’s biggest meat company by sales, has been working for years to automate portions of its poultry and livestock operations around the world, said Mr. Nogueira. JBS in 2015 paid $42 million for a controlling stake in Scott Technology Ltd., a New Zealand-based robotics company that has automated lamb processing.

Scott’s system works partly because much lamb meat is sold with bones still in it, said Mr. Nogueira. A Scott-developed robotic knife arm for deboning still can’t match humans, he said, though such systems are starting to catch up.

At Pilgrim’s Pride Corp., the second-biggest U.S. chicken processor and majority-owned by JBS, deboning machines now trail humans by only 1% to 1.5%, in terms of meat yield per chicken.

“They are much closer to what the person can do than seven years ago,” Mr. Nogueira said. Technology and automation are part of the $1 billion in capital expenditures JBS USA has planned for 2020. “One day we will be there, but we are not there yet,” he said.

Dean Banks spent years directing automation projects at technology and health-care companies, most recently at X, the unit of Google parent Alphabet Inc. set up to solve some of the world’s most vexing problems. He joined Tyson’s board of directors in 2017 and became president in December.

Teaching robots to cut and sort meat, which involves soft material and variability, he said, “it’s the most challenging operational environment you can find.” The low temperatures at meat plants, kept cool for food-safety reasons, pose more hurdles for robotics, as does blood splatter, industry officials said.

Inside Tyson’s Arkansas robotics lab earlier this year, one room included a robot with a mechanical arm mounted inside a glass box, resembling an arcade crane game. With the push of a button, the robot’s arm dumped three cups of multicolored beads onto a tray, then rapidly grabbed each one and sorted them by color in less than 30 seconds.

Tyson’s technicians are trying to teach machines to recognize and quickly adjust to differences in meat coloration and shape, part of what executives say makes meat processing harder for machines than, say, assembling cars from uniform, manufactured components.

European meat plants have incorporated more automation than their U.S. counterparts, using lasers and optical eyes to read cuts of meat on a conveyor belt and send them to different departments to be packed, weighed and shipped. The technology means a single worker in plants in Sweden, Denmark and France does the work of eight or nine workers in U.S. plants, though the operations run at a slower pace, said Mr. Lauritsen, the union official.

“If you take half the jobs out of Worthington, Minn., and Denison, Iowa, you take away 2,000 jobs and the payrolls that come with them,” he said, referring to two towns with meatpacking plants. “You’ve crippled those communities.”

Tyson’s Mr. Banks said that workers are in no danger of being replaced broadly by robots soon. Workers whose jobs are automated can be moved into other, open positions, so layoffs aren’t needed, he said. Robots can improve employee retention, he said, by making jobs more skilled and less strenuous.

Mr. Banks said that the technology is needed to relieve bottlenecks in Tyson’s plants, where lack of skilled workers in critical jobs can slow overall production. To solve one such problem, he said, Tyson designed a water-jet cutting system capable of carving up chicken breasts more precisely than humans can. Many Tyson chicken plants now are using the system to develop new products that they couldn’t make using human labor, he said.

Automation “is something we think is going to be revolutionary for our business,” said Doug Foreman, Tyson’s director of manufacturing technology, who has designed meat-cutting equipment for decades. “We are on the cusp of a significant rollout.”