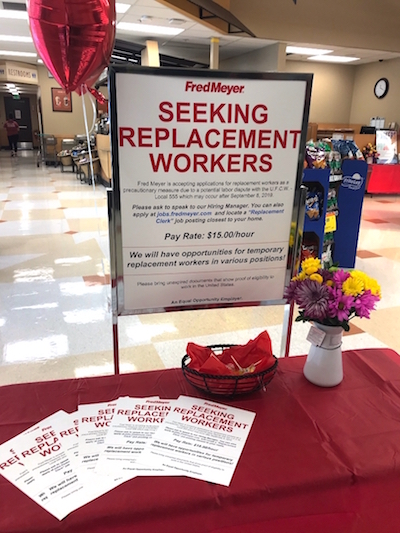 After 15 months of unsuccessful negotiations, United Food and Commercial Workers (UFCW) Local 555 announced Sept. 10 the cancellation of all its Oregon and Southwest Washington collective bargaining agreements with Kroger, which owns Fred Meyer and QFC. The collective bargaining agreements contain a no-strike pledge, so their cancellation frees the union to strike or take other economic action against the company, such as a consumer boycott. Over the summer, members voted by 94% to authorize the bargaining team to call a strike, but the union hasn’t yet said that will happen.

The contract cancellation comes after Fred Meyer stores began posting signs in stores seeking to hire workers to replace its employees if they go on strike. The signs offer would-be strikebreakers $15 an hour, more than Fred Meyer pays many current employees.

In bargaining, Local 555 is calling for big wage increases, and asking employers to address a gender pay gap. Local 555 says women grocery workers at Fred Meyer make $1.31 an hour less than men on average. There’s no reason to assume the gap is intentional, but managers have been assigning women applicants twice as often as men to jobs in a lower-paid “Schedule B” wage scale that covers work in the bakery and deli departments. The employers are proposing annual raises of 30 cents an hour (40 cents for Schedule B) — at a time when the Portland-area minimum wage is rising 75 cents a year.

Even though the contracts are cancelled, under federal labor law Kroger still has to maintain current terms and conditions while bargaining continues. The two sides are scheduled to meet for further negotiations Sept. 26 and 27.

Local 555 said in a Sept. 10 press release that it will release further information on union actions and requests for public support on Sept. 22.