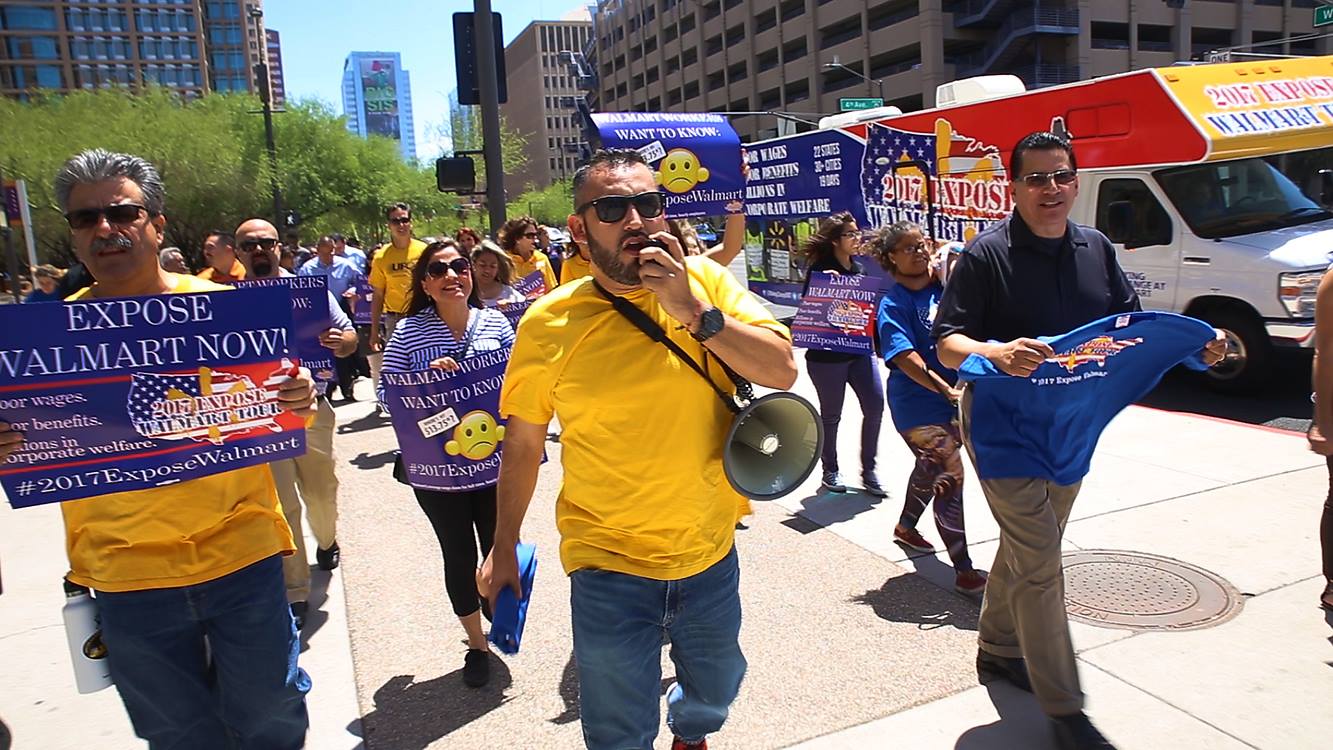 A union that represents thousands of grocery and retail works launched a national tour Monday in Phoenix to draw attention to Walmart’s wages and the thousands of police calls to its mega stores that are costing local taxpayers each year.

The Expose Walmart tour is led by the United Food and Commercial Workers International Union, which represents 1.3 million professionals in the United States, according to its website.

The Phoenix kickoff began downtown at the Calvin C. Goode Municipal Building, and featured elected officials from the city, county and state.

Rep. Richard Andrade, D-Glendale, was among those who addressed about 50 protesters, many of whom held blue picketing signs with Walmart’s signature smiley face distorted into a frown.

Andrade, speaking as what he described as a “union brother,” said he was concerned that Phoenix Walmart stores ranked as three of the top five addresses in the city to generate calls to police.

“We all know the city of Phoenix, as well as many Arizona cities, are experiencing a police shortage,” he said. “So (by) Walmart refusing to address these issues, that means these police officers — who should be in our community — are busy responding to incidents at Walmart …”

Andrade and other officials cited a December report in The Arizona Republic that showed how three Phoenix Walmart stores made up the No. 1, 3 and 4 locations with most calls to police between 2011 and mid-2016.

Walmart officials at the time of the report said new security policies are being enacted around the country, including more employees at the entrance and a new diversion program that would spare police calls for certain low-level offenders.

On Monday, Walmart Director of Corporate Communications Blake Jackson credited the diversion program, Restorative Justice, for a 35 percent drop in Walmart calls to police nationwide. Additionally, he said, the recidivism rate for those who complete the program hovers at about 2 to 3 percent.

“The upshot there is it’s working, it’s effective, and we’re getting good feedback from law enforcement across the country,” he said.

After a few speeches on Monday, the tour marched protesters three blocks away to the Phoenix Police Department. Parked near the entrance was a large sign that read, sarcastically, “Walmart Security Headquarters.”

“We want to thank the Phoenix Police Department for doing Walmart’s job,” Phoenix Councilwoman Kate Gallego said among cheering protesters. “Walmart is forcing city of Phoenix taxpayers to pay for security costs that Walmart should be paying itself.”

Organizers said the Expose Walmart tour will visit 30-plus cities in 22 states around the country, concluding at Walmart’s annual shareholders meeting in Fayetteville, Ark., on June 2.

Amy Ritter, director of communications for the UFCW’s campaign “Making Change at Walmart,” said the tour’s unifying theme is “corporate welfare,” and how taxpayers are forced to subsidize the megastore and its workers.

The tour cited a 2014 study by Americans for Tax Fairness that found the state paid $143 million in public assistance for Arizona Walmart employees.

Jackson, the Walmart spokesman, said the group’s claims don’t tell the whole story, and noted that the retailer is a significant taxpayer in the community itself. He said the Arizona stores collected $270.3 million in sales tax and paid $91.5 million in state taxes.

When asked about wages, Jackson said the company has made strides in the past few years in investing in their employees. He said hundreds of thousands of employees have taken advantage of the new training opportunities.

“We are staunch believers in that when our people succeed, our business succeeds,” he said. “And our customers are telling us that they’re liking what they’re seeing.”

Ritter said the tour would feature city-specific grievances on their stops as well. While Phoenix drains police resources, she said, events in other cities could feature low-paid employees and racially-based security practices like locking up hair-care products aimed at African-Americans.

“Walmart doesn’t pay its workers a living wage,” she said. “(Employees aren’t) being trained properly, and they don’t invest enough in the stores. If they did the right thing, Walmart would get off of corporate welfare.”

The UFCW has been a frequent critic of Walmart, particularly when it comes to the wages it pays it workers and practices it says the company takes to discourage unionizing among Walmart workers.