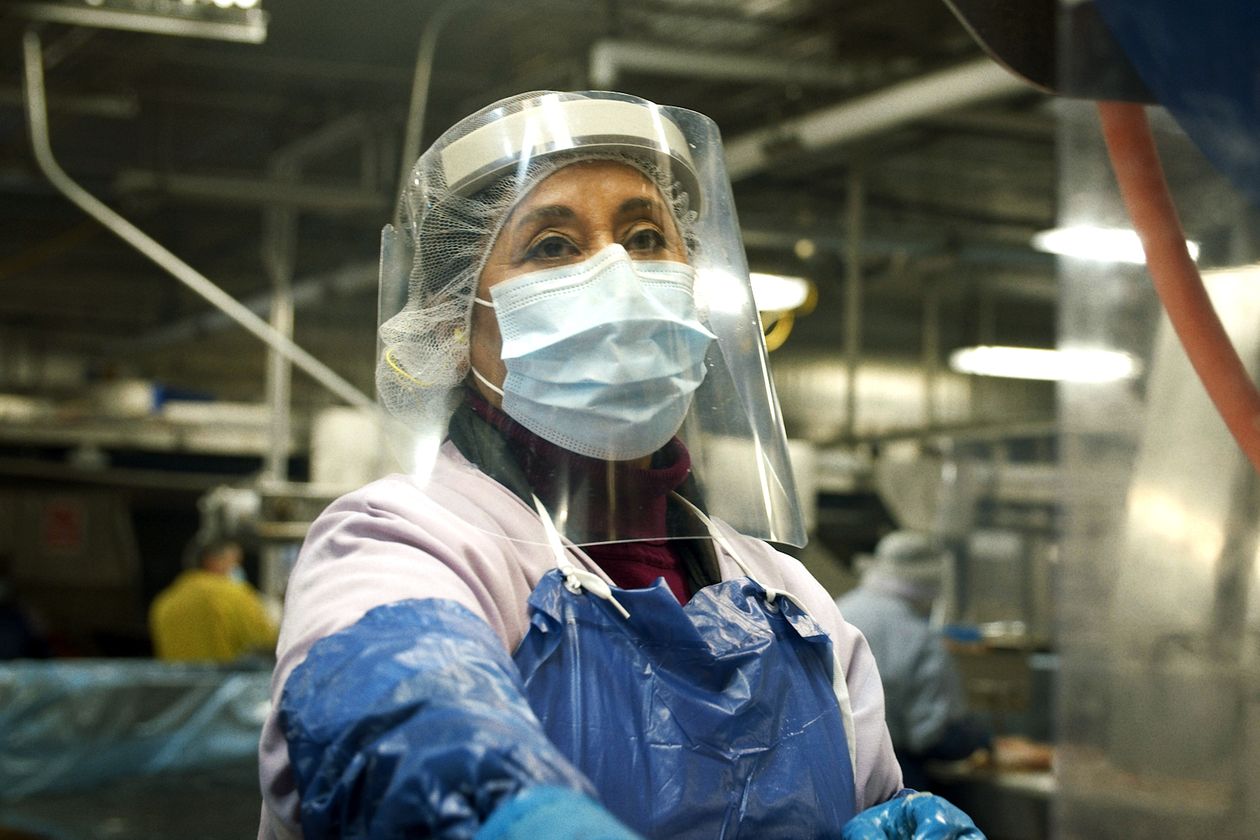 Worker advocates and food safety experts have long called attention to the speed at which poultry plants’ lines move, because the faster they move, the faster the workers have to perform repetitive tasks, sometimes with sharp tools. COVID-19 has amplified those concerns, since quick line speeds tend to require close contact between workers, making social distancing difficult.

So when the U.S. Department of Agriculture (USDA) issued waivers to allow a number of poultry plants (all of which had records of severe injuries, Occupational Safety and Health Administration (OSHA) violations, or COVID outbreaks) to speed up their lines this spring at the height of the pandemic, advocates were incensed.

At the end of July, the United Food and Commercial Workers International Union (UFCW) sued the USDA to void those waivers. At the same time, Senator Cory Booker (D-NJ) introduced legislation to suspend the waivers and prevent the agency from issuing more. Organizations including UFCW, Food & Water Watch, and the National Employment Law Project (NELP) were laser-focused on getting the USDA to stop issuing waivers, and the agency announced it would do so on April 24.

However, few noticed that it also added a new item to its spring 2020 agenda: a proposed rule that would permanently increase poultry line speed limits from 140 birds per minute to 175 across the board.

”This is adding insult to injury. We raised holy hell about [the waivers, and] finally, they stopped it,” said Tony Corbo, a lobbyist at Food & Water Watch. “But they turned around and said, ‘Okay, we’re going to propose a rule to allow all the chicken plants to be able to increase the line speeds.’ It’s just unconscionable with what this department is doing.”

Corbo and many others point to poultry industry influence at the USDA as the motivating factor in the proposed rule change. That argument was bolstered by the recent announcement of 10 new members to a 20-member committee that advises the federal agency on meat and poultry inspection. As of mid-August, the committee includes three members who either directly work for or are paid advocates for industrial-scale meat production, while representatives for smaller-scale producers and farmers are not represented at all.

The upcoming proposed rule is the latest move in a long-running saga that spans several presidential administrations. After a pilot program, the USDA under President Obama proposed allowing plants to speed up their lines. But after reviewing public comments and evidence, including the findings of a National Institute for Occupational Safety and Health study that showed high levels of carpal tunnel syndrome even at much slower line speeds, the agency maintained the 140 birds per minute standard.

In 2017, the National Chicken Council (NCC), which represents the biggest companies in the industry, filed a petition asking the USDA to waive any limit on line speeds for some plants. More than 100,000 comments were posted in opposition to the petition, and the USDA ultimately rejected it, although it did later institute the waiver process to allow certain plants to increase speeds to 175 birds per minute.

The NCC maintains that faster line speeds are safe for workers and cites Bureau of Labor Statistics data that show injuries in poultry plants have gone down 84 percent since 1994. It also says there is no data to back up claims that faster speeds place workers at greater risk for contracting COVID-19, although Centers for Disease Control (CDC) guidance and an April CDC memo to Smithfield Foods note that “changes in production practices (e.g., line speed reductions) may be necessary in order to maintain appropriate distancing among employees.”

Although a USDA Food Safety Inspection Service (FSIS) spokesperson declined to provide a timeline on when the rule to permanently increase line speeds would be published, or answer a question about why the agency added it to the 2020 agenda, advocates like Berkowitz say the change is likely the result of poultry industry influence. (The NCC did not respond to Civil Eats’ request for comment about whether it lobbied for this more recent rulemaking.)

Meanwhile, the USDA’s new additions to the National Advisory Committee on Meat and Poultry Inspection (NACMPI) do suggest close ties with industry. In addition to a representative from the North American Meat Institute, a trade group for the biggest meat and poultry companies, NACMPI also took on a representative from JBS USA, a Brazilian-owned company that was recently caught purposefully exporting rotten and tainted meat, as well as a previously appointed representative from Pilgrim’s Pride, which is also majority owned by JBS. And on the other side of the revolving door sits Alfred Almanza, who has served as the global head of food safety and quality at JBS since leaving a role as FSIS administrator in 2017.

Many small farmers and processors around the country were angered by the committee announcement, noting that the biggest corporate meatpackers have long filled many of the NACMPI seats.

Brian Sapp oversees processing of poultry and red meat at White Oak Pastures, a regenerative, pasture-based meat operation in Georgia, and previously served two two-year terms on the committee. Sapp said he was the only member representing smaller plants during his terms, and the issues that came up didn’t apply to White Oak’s processing because they were mostly “industrial issues.”

And yet, in roundtable discussions with FSIS employees over the last few years, he says the agency repeatedly emphasized how many of the processors they oversee are smaller operations. “Every meeting we go to they talk about how many of their customers, how many of their regulated facilities are small and very small. So FSIS is going to talk about how they’re working with small processing plants and then not have representation? It’s kind of outrageous,” he said. “There’s a disconnect there somewhere. I don’t know why or how, but it’s there.”

On the topic of line speeds, at least, advocates who see a disconnect will be able to voice their concerns once the rulemaking process begins. While the FSIS spokesperson declined to provide a timeline, he confirmed the agency “plans to propose” a rule to up speeds to 175 birds per minute and that it will be published in the Federal Register for public comment.

“FSIS will then review and analyze comments received and make appropriate changes to any final rule,” said the spokesperson.