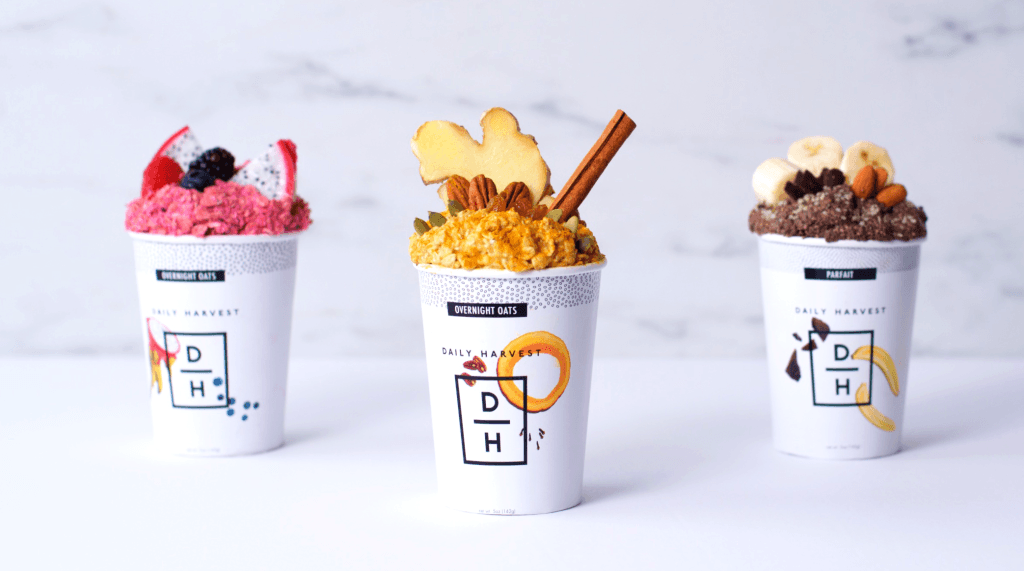 The future of healthy fast food is frozen.

Celebrities like Serena Williams and Gwyneth Paltrow are investing big money in Daily Harvest, a plant-based frozen meal delivery service with pre-made smoothies, chia parfaits, soups and grain bowls loaded with superfoods and nutrients from whole fruits and veggies. Its out to change the stigma attached to the hyper processed frozen food aisle.

The female-led company received $43 million in a third round of funding led by venture capital firms and olympic athlete Shaun White, celebrity chef Bobby Flay and actress Haylie Duff this month that’s allowed it to expanded its product line to include 33 meals ready to eat instantly.

Daily Harvest items seem to be nourishing the need for healthy fast food where there’s long been a gap in the frozen food space with pizza, chicken nuggets, and standalone veggies like chopped spinach.

“The frozen aisle is literally and figuratively a very cold place,” CEO and Founder of Daily Harvest Rachel Drori tells Moneyish. “Our investors are enthusiastic about how we’re leveraging the long-overlooked and misrepresented frozen food market to make nutritious, plant-based food convenient and accessible nationwide.”

The female-led company started out with just smoothies in 2015, and has since expanded new savory grain bowls made with cauliflower and rice (a lighter riff on Italian risotto), and a zesty quinoa chipotle burrito bowl out in January. Its acquired more than 100,000 subscribers nationwide.

Drori, 35, thought up the idea for the business based on her own dilemma of wanting to eat healthy, but having no time to meal prep when she was working in sales and marketing for Gilt Groupe. She would freeze fruits and veggies herself and make smoothies to eat on the go. The life hack eventually turned into a business plan that prompted her to quit her job and rent out a commercial kitchen in Long Island City, Queens where she started delivering her fruit-filled smoothie cups to friends and family. Since then, she enlisted Michelin-trained chef Jessica Young and a nutritionist to help think up creative and tasty recipes, and hired a team for more than 30 ladies to help run the brand which ships nationwide.

“I had to pull all nighters,” says Drori of beefing up business. “The biggest challenge was taking time away from a rapidly scaling business. There just were not enough hours in the day.”

Frozen food is heating up the market estimated to reach $360.36 billion by 2024. And according to the Mintel Global Food and Drink Trends 2017 report, there was a 257 percent increase in the number of vegan food and beverage launches in 2016, compared to five years ago, and many brands have attempted to break into the healthy frozen food space. Organic brands like Annie’s Homegrown has a line of pizza bites with no artificial ingredients, and made mac ‘n’ cheese healthyish before being bought by General Mills. Kashi boasts a fiber-rich line of frozen waffles; and plant-based brand Amy’s has meals you can defrost for breakfast, lunch and dinner from apple toaster pops to a black bean burritos and vegetable lasagna, but none deliver.

Daily Harvest superfoodies can opt to order six to 24 cups weekly at $7.99 each, or monthly (approximately 24 cups) for $6.99. You can choose a combination any snack or meal, like the immunity-boosting tomato minestrone packed with veggies like zucchini, tomatoes and chickpeas; a cacao and avocado pudding said to taste like chocolate and loaded with pea protein; or sundaes like chocolate brownie batter made with cocoa, black beans, hemp protein and coconut. Each require minimal prepping effort — just add water and heat soups, smoothies need a liquid base like milk added before being tossed into a blender; and grain bowls can simply be microwaved or sautéed on the stove.

“Each is meant to be a nutritional powerhouse that’s a balance of fiber, healthy fats and all the things you really need to sustain yourself so you don’t get a sugar high and crash,” says Drori.

The frozen fast food has attracted a handful of celebrity investors. Tennis ace Williams, who expressed interest in the brand earlier this year, personally called Drori.

“With Serena I got an email from her now husband [Alexis Ohanian] who simply said ‘I absolutely love your product.’ He said ‘My girlfriend is also obsessed. I’d love for you to talk to her,’” Drori recalls. “I got on the phone with Serena Williams and she wanted to invest.”

Nutritionists say eating frozen fruits and veggies is actually better for you. New research from the University of Georgia found that frozen fruits and vegetables are just as nutritious as their fresh counterparts with some even retaining more nutrients, particularly when it comes to vitamin A.

“I totally advocate for freezing fruits and vegetables. What happens is they’re picked at the height of ripeness and flash frozen so they preserve the nutrients better as opposed to sitting in trucks or on the supermarket shelf,” says registered dietitian and nutritionist Lisa Young.

Drori predicts the hot new superfood of the new year will be the unassuming ingredient pine pollen, a nutritive adaptogen tonic powder collected from pine trees and consumed as a dietary supplement. It’s said to help the body cope with stress.

“You can put it in anything. It has barely any taste and it’s just really wonderful,” she says.