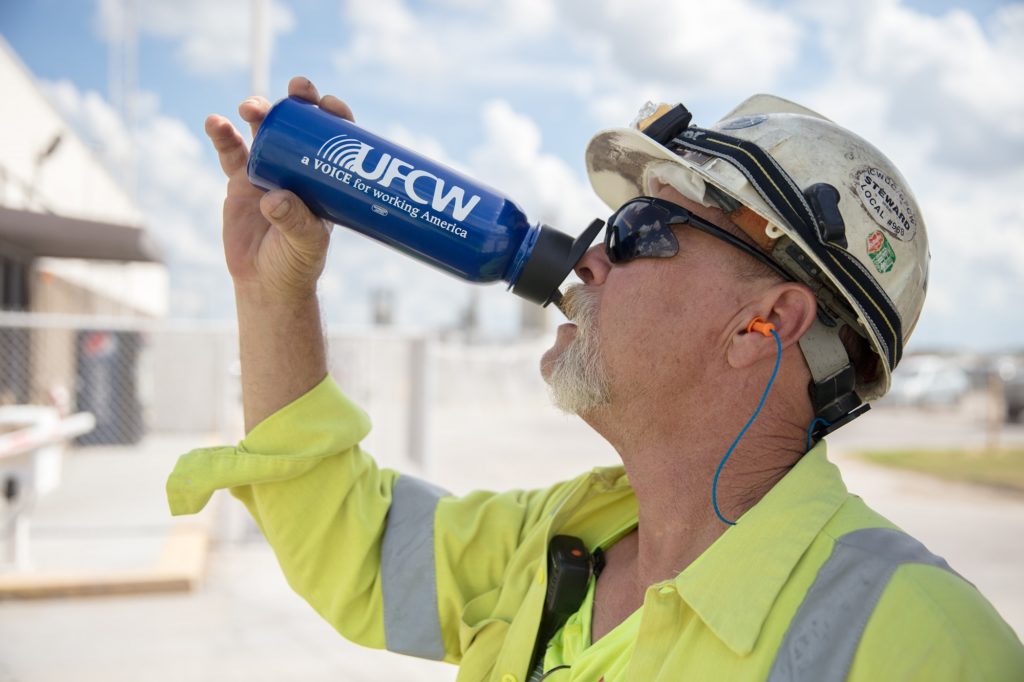 With Official Systems Swamped, Union Gets Into Contact Tracing

The United Food and Commercial Workers International Union is stepping in where the government has failed, running its own coronavirus contact-tracing program for 1.3 million members.

Since the Covid-19 outbreak hit, the union has sent agents into grocery stores, meatpacking plants and food-processing facilities. They talk to workers and comb work schedules to figure out who might have been exposed. Then, they notify the employer’s human resources department and direct workers to free testing sites, some provided by the union.

The program fills a void left by the Trump administration, which has failed to create a national test-and-trace regimen — and is an active advertisement for a labor movement that’s been waning for decades. Local health departments, which usually perform the function, have been overwhelmed by a disease that has sickened more than 4.8 million Americans and killed more than 158,000. And in any event, testing delays make contact tracing impractical in many areas.

In such disarray, workers must fend for themselves, said Marc Perrone, international president of the union.

“The counties really don’t have the resources at this point in time to ultimately be able to do that, and they haven’t,” he said. “In the vacuum, we are trying to serve that role.”

The union is using business agents and shop stewards to fill in the gap. Among its grocery, meatpacking and food processing members, there have been at least 223 deaths from Covid-19. More than 34,000 front-line workers have been infected or exposed.

“We track down every time we hear a rumor about someone out sick,” said Jonathan Williams, a spokesman at UFCW Local 400 in the Mid-Atlantic region. “We end up chasing down a lot of situations that aren’t cases.”

The union collects information through its officials, via phone and from a form workers can fill out on its website. It also checks out posts on Facebook. The union keeps a tally of workers who have Covid-19, as well as those who are quarantined while awaiting test results.

“In some cases, we are the only people that are calling and warning members that they might have been exposed,” Williams said.

The union also keeps track of all workplace outbreaks — and reports them to health authorities if employers don’t.

In Dallas, Candice Oglesby, a 35-year-old shop steward who works at a Kroger Co. store, this summer investigated a rumor that a member at another location was sick. Management, she said, didn’t notify employees. She made a few calls, tracked down the person, who had tested positive for Covid-19, and took down the names of those she might have infected.

The union typically blasts text messages to all employees of an affected store, warning them that there’s a case.

Kroger said in a statement that it follows U.S. Centers for Disease Control and Prevention guidelines and usually completes its own contact tracing within 24 hours. “We are in regular communication with our Dallas union partner, and they have not provided any indication that our contact tracing process is unsatisfactory,” the company said.

In the Philadelphia area, union representative Linda Bello, 52, said that in the spring, she was handling as many as 15 calls about cases each day. “Some were panicked, some were scared,” Bello said.

The flood has nearly dried up since Pennsylvania’s health department began asking businesses to identify people who have been in contact with a sick person.

There’s no federal mandate for all employers to do contact tracing: CDC guidelines are merely advisory. Guidance from the Occupational Safety and Health Administration tells employers they don’t have to record an illness if they can’t be sure it was acquired at work. Companies have to follow state and local guidance, which itself may not be enforceable.

“Absent that national strategy and directive, it’s been left to a patchwork of voluntary programs,” said Wendell Young IV, president of UFCW Local 1776 Keystone State in Pennsylvania. “Doctors’ offices don’t have the resources to do it. Hospitals — same thing. The employers are learning on the go.”

“There are many gaps in testing and contact tracing right now, and these gaps reflect a failure of federal leadership,” said Josh Sharfstein, a vice dean at the Johns Hopkins Bloomberg School of Public Health. In addition to more national coordination of contact tracing, what’s needed is better data reporting, clear standards and more funding, he said.

The virus efforts come a time of broadening support for the labor movement. A 2019 Gallup poll showing 64% of Americans approve of unions, up from 53% five years earlier.

Still, participation has weakened by historical standards, with 10.3% of wage and salary workers counted as members of unions in 2019, down from 20.1% in 1983, according to the Bureau of Labor Statistics. In the private sector, the number was only 6.2 %.

“This crisis is revealing the importance of unions,” said Erin Hatton, an associate professor of sociology at the University at Buffalo. “If things are going relatively well in the workplace, it is easy for many people to believe that unions are not necessary. But when things go wrong — whether for individual workers or for many workers — unions can be an incredibly important source of protection and strength.”

They could use it now. The UFCW in particular has been hit hard by the pandemic, with outbreaks rampant at meatpackers, said Kate Bronfenbrenner, director of labor education research at ILR School at Cornell University. In April, President Donald Trump signed an order that removes some types of potential liabilities from employers.

Union officials said they fight for exposed co-workers to get paid quarantine leave.

“Often we’ll have a bit of a debate with the employer: Is it everyone who worked with that individual that same day, or who worked in that section of the store?” Williams said. “Who should get tested and isolated?”

In Southern California, with infections rampant, the union is butting heads with employers over whether workers who’ve been exposed multiple times can get two or three paid quarantine leaves, said John Grant, president of UFCW Local 770.

One danger of the union program is that some of its contact tracers who visit shops in person get Covid, Perrone said. Back in Dallas, Oglesby just returned to work after being in quarantine after a co-worker tested positive.

After she got tested, she let her union agent know.

“That way, they can make sure everything is going the way it’s supposed to,” she said. Oglesby’s results came back negative and her tracing continues.