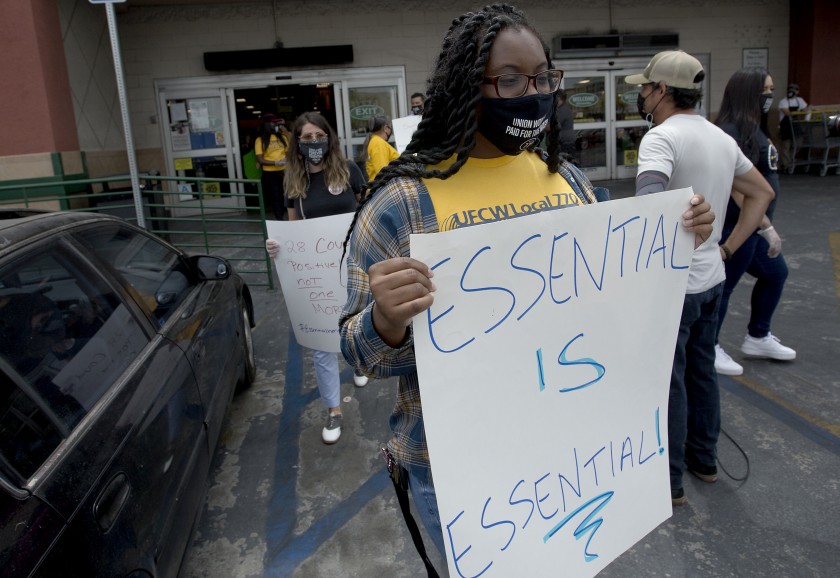 Workers call on Walmart, Amazon and other retailers to bring back hazard pay ahead of holiday rush

By adminNovember 24, 2020December 3rd, 2020No Comments
“Amazon and Walmart could have quadrupled the hazard pay they gave their frontline workers and still earned more profit than the previous year,” according to the report’s authors, Molly Kinder, Laura Stateler and Julia Du.

Heather Knox, a spokeswoman for Amazon, said the company pays a starting hourly wage of $15, offers health benefits and has invested in a number of covid-related safety measures, including on-site testing. “We encourage anyone to compare our overall pay, benefits, and workplace environment to other retailers and major employers across the country,” she said in a statement.

Jami Lamontagne, a spokeswoman for Walmart, said the retailer has given workers more than $1.1 billion in cash bonuses during the pandemic. The company also offers paid sick leave, as well as emergency leave for workers who test positive for covid-19. With 1.5 million U.S. workers, Walmart is the country’s largest private employer.

Courtenay Brown, who works at an Amazon Fresh warehouse in Newark, says she fears getting sick during the pre-Thanksgiving rush.

“Right now is what we call the ‘turkey apocalypse,’ where we’re asked to push out as much as we can,” she said in a call with reporters. “We are literally in the middle of an outbreak at my warehouse right now. Every day we get messages about one or two people getting infected.”

“The fact that [Amazon executives] decided to close the Seattle building [and allow headquarters staff to work remotely] until next year while keeping thousands of us jam-packed in a small warehouse is more than a little upsetting,” said Brown, who is a member of United for Respect.

Kroger, which gave employees a $2 hourly “hero bonus” from March to May, has largely funneled windfall profits to shareholders, the Brookings report said. The company bought back $211 million in stock during the second quarter and announced an additional $1 billion in buybacks in September. While those actions juiced the price of Kroger stock, the company’s cashiers, stockers and other front-line workers “have gone 181 days without hazard pay, and will enter this new, deadlier phase of the pandemic earning some of the lowest wages in the industry,” according to the report.

Kristal Howard, a Kroger spokeswoman, said the company has spent more than $1 billion since March on worker safety and bonuses, including $100 in store credit it issued to each employee last week. The company’s average wage, she said, is more than $15 an hour.

“Our most urgent priority throughout this pandemic has been to provide a safe environment for our associates and customers,” she said.

But workers say it isn’t enough. Janet Wainwright, a meat cutter at a Kroger store in Yorktown, Va., says she is increasingly worried about her health but cannot afford to take time off. Although the company offered employees covid-related sick leave early on, it now requires workers who test positive for the virus to take 14 days of unpaid leave while they recover, she said.

“Since the beginning of the pandemic, there has not been a day when my co-workers and I have not worried about our safety,” said Wainwright, who is a union steward. “Americans need to know the terrible choices workers like me are being forced to make every day.”