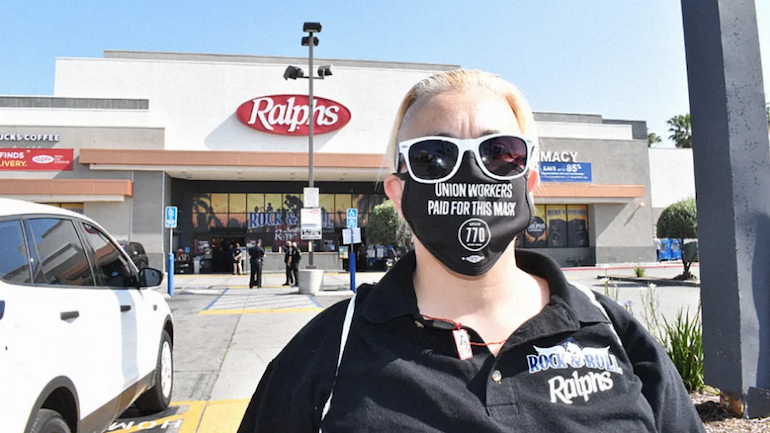 Supermarket workers feel alone and unrecognized over COVID-19: ‘Is today the day I get the virus?’

Adding to the stress is the growing political battle over granting grocery workers “hero pay,” a move that prompted one chain to close two stores in response to a local law.

Union officials said 21 workers at the Food 4 Less in North Hollywood have tested positive for the coronavirus since the pandemic started. They said 90% of those cases occurred between November and December.

Those statistics and the emergence of more contagious coronavirus variants underscore the extraordinary risks grocery workers face as they eagerly await vaccinations, which are being administered this month.

United Food and Commercial Workers International Union Local 770, which represents more than 20,000 grocery workers in Los Angeles, Ventura, Santa Barbara and San Luis Obispo counties, said 5,500 union and nonunion workers at several grocery stores have been infected with the virus since the start of the pandemic. At least 428 workers were infected in November.

According to the union, 773 of its 2,673 Food 4 Less union workers have tested positive for the coronavirus.

Cities across the state have acknowledged the growing risks these workers face by considering or passing hazard pay ordinances — dubbed “hero pay” — that require large grocery stores to pay their workers an extra $4 or $5 an hour for 120 days.

Grocery store owners, however, have resisted such ordinances by threatening to raise prices, cut pay and even close stores. The California Grocers Assn., which represents over 300 retailers, has sued some cities to try and stop the temporary pay hikes.

One of them was the Food 4 Less at 2185 E. South St., where Robert Gonzalez, 45, has worked for six years, stocking the frozen food section.

“The news was shocking and devastating,” he said. “There’s a lot of anger, confusion and distrust of the company.”

Gonzalez said morale was already low at the store. He said employees were exhausted from having to work long hours to fill shifts left vacant by colleagues who had contracted the virus.

There was always a higher risk of infection when customers came into the store not wearing their masks properly or when they didn’t follow social distancing rules. But with coronavirus cases much more prevalent at the end of 2020, the sense of danger became more pronounced.

Gonzalez said he worries about his wife’s safety. She works in the meat department at another Food 4 Less and has more interactions with customers than he does. He said his wife already lost some relatives to COVID-19.

“It’s just a lot riskier now and stressful,” he said. “We deserve the hero pay and it’s not like it’s a forever kind of thing.”

Workers say the company stopped paying hazard pay in May, which they have been fighting to get it back amid new contract negotiations.

Kroger told The Times it has spent $1.3 billion to reward workers and implement safety measures throughout the pandemic. Most recently, the grocer announced it would pay workers $100 if they got vaccinated.

Trader Joe’s recently raised its $2 hourly hazard pay to $4 nationwide but also moved to cancel its midyear raises for its 10,000 employees that were scheduled for this summer.

Whole Foods employees, who spoke on condition of anonymity because they were not authorized to speak to the media, said that while the company has given them an additional two weeks of COVID-19 pay, they lost their extra $2 an hour in hazard pay in May and were told they could donate their paid time off to colleagues who don’t have any.

Some workers say they’ve had to be out longer than two weeks due to the virus and have lost pay when they’ve run out of paid time off.

A representative for Whole Foods said it was inaccurate for workers to be told they could donate their paid time off and directed The Times to its website for a list of actions it has taken, including the expansion of its Team Member Emergency Fund for employees.

Shoppers and union officials have criticized large food retailers over pay cuts, given the profit growth they’ve experienced during the pandemic. Kroger, for example, saw its profits double to $2.66 billion from $1.33 billion the year before.

A November report by the Brookings Institution, a think tank based in Washington, D.C., analyzed pay to front-line workers at 13 of the 20 biggest retail companies in America, including Kroger, Amazon and Walmart. The report found that the least-generous companies were the most financially successful, posting huge profits.

“In total, the top retail companies in our analysis earned on average an extra $16.7 billion in profit this year compared to last — a stunning 40% increase — while stock prices are up an average of 33%,” the report read. “The 13 companies we studied raised pay for their frontline workers by an average of just $1.11 per hour since the pandemic began — a 10% increase on top of wages that are often too low to meet a family’s basic needs.”

When the pandemic arrived last year, Hernandez quickly took it seriously. She took her cues from the news and paid extra attention to what was happening in China. She said she was one of the first to wear masks at work and immediately decided to keep her son home from school.

She didn’t think the pandemic would last long. She trusted that government and health experts would find a way to stop the virus. But as time passed, Hernandez feared that perhaps no one had it under control.

At work, she said she frequently raised concerns about the number of people in the store. Sometimes, she said, the lines would reach to the back of the store. She also found herself having to enforce mask rules.

For nine months, she would arrive home, take off her shoes and leave them outside. She’d throw her work clothes in the washer and then shower. She and her family have stuck to these daily routines.

She suspects that on Nov. 10 she may have gotten infected by a maskless man who yelled at her. She said three days later, she began to develop all the classic symptoms: chills, fever, fatigue and a loss of smell and taste. She later tested positive for the coronavirus.

At home recovering, Hernandez said co-workers texted her about new infections and complaints about capacity issues at the store. When she returned to work, Hernandez decided to take more precautions.

“I’m scared because I don’t want to get it again,” she said. “I’m wearing double masks. I’m doubling up on gloves sometimes and I find myself washing my hands a lot more often.”

Norma Leiva, 51, a warehouse manager at Food 4 Less in Panorama City, a neighborhood in Los Angeles that became a COVID-19 hot spot, began to hear of colleagues getting sick, including grocery food vendors. She said she worried daily because she suffered from bronchitis and her husband had high blood pressure.

Union officials said 26 workers at Food 4 Less in Panorama City have tested positive for the coronavirus. There were zero cases in March but by November, 10 cases had emerged. Union officials said 75% of the reported cases occurred between November and January.

Leiva said every morning she prayed before she went to work. When she arrived at the front doors in the early hours, she’d get her temperature checked before entering.

She and Hernandez said there are more protocols in place now than when the pandemic started. The store will conduct camera audits whenever an employee has tested positive to see which workers were around them. They also require those workers to quarantine.

She said she continues to pray for the protection of her family from the virus. And that soon — very soon — she gets vaccinated.

“Hopefully I can make it without getting sick,” she said, “and just try and stay safe.”