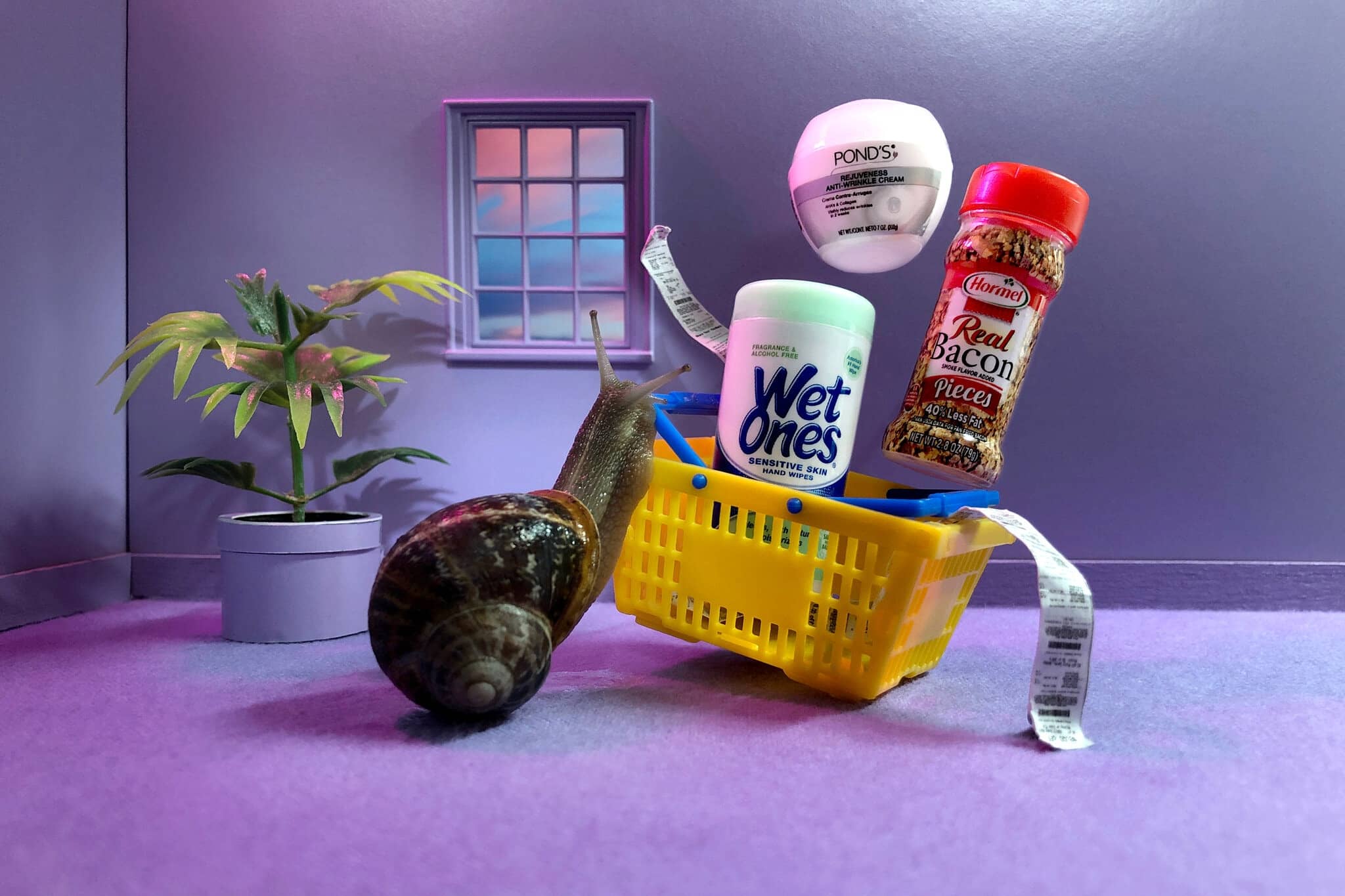 The Soothing Allure of Mini Brands

By adminMarch 5, 2021March 11th, 2021No Comments
On my desk is a detailed miniature shaker of McCormick Crushed Red Pepper flakes. The bottle is small enough to pinch between my thumb and index finger; it looks as if it was made to fit the spice rack of an anthropomorphic hedgehog.

I keep it around for its brain-soothing properties. There is something oddly relaxing about a banal item inexplicably shrunken into a fetish object. Sometimes I unfurl a tiny paper grocery bag and place the tiny pepper bottle inside, next to a tiny tin of Spam, a tiny jar of Skippy Creamy Peanut Butter and a tiny tube of Gourmet Garden Chunky Garlic Stir-In Paste.

There is no tiny food in any of these tiny packages. They’re called Mini Brands, and they represent branding liberated from product. Zuru, the toy company that sells Mini Brands, has introduced dozens of household miniatures since their 2019 debut, including little Tresemmé bottles, little Babybel cheese rounds and little Wet Ones antibacterial wipes. On Instagram, you can find Mini Brands clutched in the dexterous paws of famous hamsters and chinchillas, and on TikTok, influencers like @minibrandsmom film themselves hunting for the 2-inch treasures at big box stores and peeling open the complex packaging with a hypnotic rhythm.

Though Mini Brands are nominally marketed to children, they scratch a grown-up itch: for the lost pleasures of the supermarket experience. I discovered Mini Brands through the writer Emily Gould, who advised me that Mini Brands “have the reassuring quotidian comfort of a trip to the ol’ grocery store,” adding, “Which, you know, is gone.”

I had never thought to appreciate the sensation of coasting unthinkingly down the supermarket aisles, luxuriating in the mundane array of differentiated food brands. But suddenly I’m attuned to what I’ve been missing: I sense it in my little McCormick shaker, in the dreamy pre-pandemic grocery footage of “How To With John Wilson” and in the deranged pep of the revived game show “Supermarket Sweep.”

Miniatures of all kinds have experienced a pandemic bump. As the virus rages outside, hobbyists can at least flex control of their own little worlds. Mini Brands service a nostalgia for the very recent past, when the grocery represented a familiar expanse; it was a place where, as Allen Ginsberg put it in “A Supermarket in California,” a person could go “shopping for images.” Now that same space feels anxious and claustrophobic, recast as a site of potential infection and a backdrop for violent confrontations between neighbors, captured by trembling cellphone videos.

You can still go to the grocery store, but you can no longer lose yourself there. Instead you can stock your own tiny supermarket by ordering a 5 Surprise Mini Brands! Surprise Ball ($6.99 on Target.com), then cracking open its flaxen plastic shell to reveal a random selection of branded miniatures. It’s an inversion of those toy gumball machines parked at the end of checkout lines; now the groceries themselves are the prize. The incidental nature of a Mini Brands acquisition —  you never know what you’re going to get — mimics the old pull of impulse shopping, where you enter through the whooshing automatic doors in search of toothpaste and emerge, bewildered, with an armful of snack items you may never actually consume.

If Mini Brands shrink the grocery shopping experience into the palm of your hand, “Supermarket Sweep” supersizes it, dramatizing the errand as an orgiastic ritual. The latest “Supermarket Sweep” reboot debuted on ABC in October (previous iterations aired in the 1960s, the 1990s and the early 2000s). It is filmed in a fake store built inside a 35,000 square foot hangar at the Santa Monica Municipal Airport; in each episode, contestants tear through it, loading hundreds of pounds of gold-wrapped hams, liquid clothing detergent and gargantuan Green Giant corn cans into their carts.

Mini Brands suggest that the iconography of the grocery store contains hidden treasures. “Supermarket Sweep” makes that explicit. Like in “The Price is Right,” arcane knowledge of consumer culture is met with outsized rewards: The contestants who can instantly recall the snack brand that nearly rhymes with “mojitos” (Doritos) or the accessory worn by the Energizer Bunny (flip-flops) stand to win tens of thousands of dollars.

At first glance, the new “Supermarket Sweep” represents a narrative triumph over Covid-19. Maskless contestants soar jubilantly down its aisles, and the show’s ringmaster, Leslie Jones, turns in a virtuoso performance as the rare American thrilled to be working inside a grocery store.

But there is something uncanny about its glossy, high-definition look. Revisiting old episodes of the ’90s version, which were made available on Netflix last summer, reveals the missing texture: a roaring studio audience waving bottles of Mountain Dew and Snuggle fabric softener in the air; contestants crammed into the produce section, perms brushing against shoulder pads; the host — the former soap opera actor David Ruprecht, dressed like a youth pastor — embracing the winners as the credits roll. The vast, antiseptic, eerily muted presentation of the new version only emphasizes what is a controlled simulation on a studio set. Watching the contestants frantically haul food into their carts, they begin to resemble hoarders stocking up for the pandemic looming just outside.

The disaster novel, as Hillary Kelly pointed out recently in The New Yorker, often depicts such desperate shopping sprees. In these narratives, the supermarket stands as a monument to consumer culture. Its breadth of offerings (or lack thereof) functions as a class marker, and with its shelf-stable foods, unseasonably ripe produce and wasteful packaging, it hubristically asserts control over the natural world even as it accelerates its decline.

In “White Noise,” Don DeLillo’s apocalyptic novel from 1985, the gleaming grocery store is framed as a symbol of delusion, papering over signs of social and ecological collapse: “Everything was fine, would continue to be fine, would eventually get even better as long as the supermarket did not slip.” And in Rumaan Alam’s “Leave the World Behind,” published last year, a yuppie’s trip to a Hamptons market — where she blows hundreds of dollars on organic hot dogs, a “jar of locally made pickles,” $12 maple syrup and “three pints of Ben & Jerry’s politically virtuous ice cream” — is her final act of blithe privilege before a mysterious disaster upends her life.

The cultural downfall of the grocery store — from consumer paradise to paranoid hub of contagion — is captured in real time in “How To With John Wilson,” HBO’s jewel box of a show built around the documentarian Wilson’s poetic and sly hand-held footage of New York City. In an early episode, Wilson takes a trip to the supermarket, where he encounters a man whose mind is filled with false recollections of the items on the shelves. (He remembers, for instance, that the grinning sun on the Raisin Bran box wore sunglasses.) The man belongs to a collective dedicated to suggesting conspiratorial explanations for this phenomenon — aliens, perhaps, or alternate universes — but the easier answer is that the meaningless iconography of the grocery store has rooted itself so deeply in the American mind that even the products themselves seem less real than our imagined versions.

Later in the series, Wilson returns to a market, only to find a seemingly endless line of shoppers snaking through the aisles, carts heaped with provisions as the virus swarms the city. This was, in retrospect, a mistake — unmasked crowds loitering inside for hours — but it speaks to the irresistible pull of the supermarket as a psychic shelter, even when it is in fact a threat.

Lately, I have been gravitating toward different kinds of images of Mini Brands. Not the collections carefully posed on Instagram, but the photographs posted alongside one-star reviews on Target.com. Published by frustrated and regretful buyers of the Mini Brands! Mini Mart set, they reveal scenes of devastation: mini plastic shelves hanging from their mini hinges; mini Cool Whip containers shoved into mini fridges; mini boxes of cereal and Boursin cheese strewn across mini tile floors. These images excite me, not because they transport me back to the idealized grocery aisle, but because they inadvertently deconstruct it.

In the photographs, it looks as if the Mini Brands! Mini Mart has been ransacked and abandoned in the face of some unseen menace. The supermarket has fallen, and now the miniature version is toppling, too.